Sky News goes HD -That was the week that was 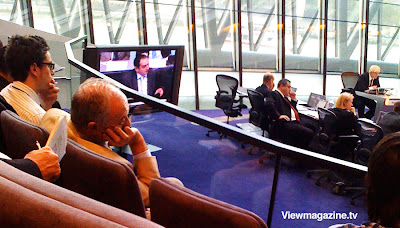 Sky News to go HD. It's a headline-in-waiting with a couple of months yet.

But a visit to Murdoch's enterprise revealed their behind-the-scenes plans, boldly going where no one else has gone before.

The implications for HD will be wide and significant.

The video I shot with a running commentary by one of Sky's longest serving and most senior execs is something I'm looking forward to editing and posting. You can see an opening clip of Sky News on viewmagazine.tv

Talking of viewmagazine, lots of things coming up that could be of interest.


The Seat of Power
On Wednesday, I was at the Comedy Club. Apologies, City Hall - London's seat of power.

We were a dawn away from one of the biggest hikes in transport fares, but if you closed your eyes and imagined the heat of a TV studio, at times you could be forgiven for thinking this was Comedy Central's Saturday Night Live.

Mayor Johnson, jutting jaw, gladiatorial seated-posture, his flop of hair occasionally sashayed back like a commercial for hair colour streaks, does one liners that would be the envy of most stand-ups.

Labour assembly members, more often than not were furious; one called him -an-economical-with-the-truth kinda guy.

The chair asked the Labour member to retract, who then duly repeated the word. Is City Hall qualified or absolute privilege for libel? In any case the Tories in their pin stripes were harrumphing it. "here, here".

I wrote copious notes for a sketch, but alas they are no where to be found - at the moment.

South Bank creativity
Steve Reich, the Pulitzer Prize winner for Music comes to the South Bank. And in a couple of Saturdays I hope to be producing something, ( we're yet to refine that) at the Royal Festival Hall, where he'll be playing and be interviewed afterwards.

The South Bank has this super wide screen to which I have expressed an interest to fill, so some creative work ahead.

My editor came back. Phew! the first few chapters are OK. She was more generous than that, but the hard work starts. Separating academic talk ( my research thesis - where I'm going to in 30 mins) and accessible book writing is Frankestinian.

Research for this is coming along, with visits due to Moscow, Serbia and South Africa.

So here we are, a week plus of research and presentations at the SMARTlab. It'll be great to see friends and swap our perennial stories of how utterly bushed we are.
Posted by Dr David Dunkley Gyimah at 7:20 am