To be published on South Bank Centre site


Videojournalist and academic David Dunkley Gyimah has been made an artist in residence (AIRS) at one of the largest single-run arts centre in the world, The South Bank Centre.

This is the first time the South Bank has invited a videojournalist into its Artist program.

David has worked across all media - radio, television, video, imagery, design, conceptual media and blogs - for 23 years, 16 of those particularly as a professional videojournalist – one of the first UK union-recognised VJs.

For his residency, which will run throughout 2009/10, David will be developing a new form of artistic film journalism that operates both as documentary and as an aesthetic response to the artistic form being communicated.

Additionally, David will explore the possibilities of setting up an interactive media space at Southbank Centre, ( see Apple site) to be mirrored elsewhere in the community, and look at ideas of how culture is shared both in an arts environment and on the street.

On his site viewmagazine.tv David has created projects, which will eventually be moved to a bespoke AIRS web site he is creating for the South Bank:


David, the recipient of international awards in video journalism and innovations in journalism, is also completing a PhD into future forms of the moving image and says of his residency: ‘This is truly exciting, not just for me but the videojournalism movement breaking into creative video and programme making.

I feel the the term videojournalism is underated. Its signage points to, at its basic level, "Video" and "Journalism". However as a visual language in our hyper-modal times it is influenced by many forms beyond the semiotics of the news construct.

I believe the erosion of arts-based programmes from our TV screens, the latest being The South Bank Show merits a deep need to reinvigorate arts reportage, and in this case build on the tradition of Southbank Centre’s public information, in this case using video.

As a deep reservoir of knowledge, arts and cultures it would be my wish to find new discourses for creating arts reportage, but also to work alongside other artists, and through the style of solo video journalism I have practiced for the last 16 years continue to develop styles and manners in which we can exploit new and digital media forms to both tell stories and create our own visual and literary footprints." 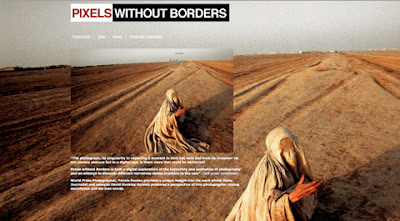