The film crew way; the vj way; and the IM6 Way 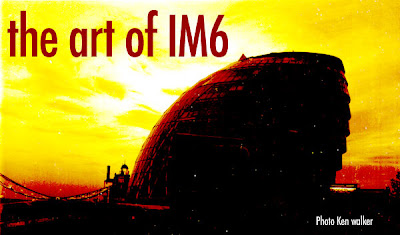 It's a matter of horses for courses. So symphonies will always be preferable as a spectacle and experience above one man and his band. Unless you're Brian Eno of course.

I love working in crews. The product is superior for the intended project. We can share and realise bigger dreams. But my approach to compound work has also been tweeked by individual skills. What I know as a videojournalist helps me understand producing, directing and editing and vice versa.

Mind you, what came first? Network production and team work at the BBC and Channel 4 before heavy lifting in videojournalism. Videojournalism allows one person to make a professional standard looking film.

There are many standards of video journalism. If you've got a camera and you shoot you're a Video journalist. The style I have gravitated to over the years has gradually taken on other elements, which leads me to why i'm posting this today.

Thanks for the email Siobhan. IM6, and there are two installments to come demonstrates something in excess of video journalism. It's design meets coding meets film making.

Infact It's 6 different ways of production and as i realised meeting other VJs pulls from different disciplines I have worked in which are:

IM6 therefore adds to the strengths of video journalism. Imagine that! A team of four with the above skills working on multiple projects.

For Ewan Macgregor going around the world on his motorbike again with Charlie Boorman, there's a kernal of this working style within their team directed by one of the most gifted one camera- one laptop film makers - video journalists Claudio Von Planta - whose previous films include going/filming up the Himalaya with the British army.

As an IM6 You DONT have to neccessarily do everything, but what you're equipped with is the skill to understand the language of others ie geek speak. You're a linguist.

As an Im6 I now know how possibe it is to really make do with one of the slogans of the broadcast industry; "kill what you can eat".

From my A1 sony camera, the principle is the (1) video, but from that I have audio for a (2) radio package as you can hear on the Gallipoli package. Then there's the (3) stills that I have used to construct the story, and built the (4) site, and worked a (5) Flash and video viral promo for internet distribution and (6) the article and accompaying blog.

So Siobhan the idea in the training is to tool you up to understand how all these work coherently together. Then you choose how you want to use your skills, but things like compression, using After effects, typography, Flash, should not be as intimdating as they first were.

Coming up a re-work dux of a 6 minute promo on Intel seeing that the Bourne Ultimatum is out and has got me excited. And to finally answer Siobhan' s question, yes I teach and train in this area, bt as seperate entities and am looking to offer this as part of a project in the future so please let me know what you're up to, yes and that means you as well. Thanks and I'm off to go on a bouncy castle afternoon.
Posted by Dr David Dunkley Gyimah at 12:58 pm