Do fries come with that shake; music with that newspaper 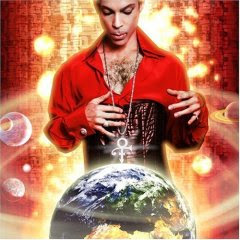 Where can I buy it? Sunday newspaper The Daily Mail rarely finds the dinning table of my house, but today for the princely sum of 1.40 ukp it came with a Prince. No not Charlie, but the one that dare not speak his name.

Throughout the week the press has been trailing the move as a revoultion in itself, purposefully grabbing aggrieved music shop owners to say the inevitable: " We're really pissed this guy's giving away his music when we've supported him for so long. Now he kicks us in the teeth".

The deal to have his whole CD carried by a newspaper could be the equivalent of buying a plane on the Net. Yep E-bay reports that's long happened as well. Difference is Prince is a commercial brand with a slew of joined up businesses behind him.

Reports of 1/4 to 1 mil have been mooted for the Purple one to have been carried straight from his paisly park to the people, and that money presumably negates overheads and shares of all manner of calculations e.g. promotion, CEO's lunch, Prince's taxis. So Mr P must be feeling peachy.

Sight unseen, without breaking a sweat tracking sales, his pockets are laden with gold. The reaction from the record shops has been amusing. No, correction! The quotes pulled out from the media for public consumption are amusing.

Music is not a church of the altruistics, so the first thing a record boss is asking when they stock an artist is :"What's the projected sales and our cut".

You sell, we take.

The idea that the record shops have been hard done has a bit of schadenfreude about it. The equivalent perhaps of saying: "I just had to turn up to Prince's exclusive gig at the Cafe de Paris, otherwise can you imagine how embarrassed that would be for him". Incidently, no ones talking about how brilliant it is for consumers.

Me, whether it came with a paper or not, I'm there. A life-long Prince fan, as an undergraduate I'd rather go hungry than forfeit buying or searching for his vinyl. OMG that word, vinyl, sounds soooo. But behind me lay a stack of albums collected within my under and post grad years as a music lover and DJ.

A precocious young man burst on he scene with this album and wow, have some of that. Then the track "Kiss", playing at a one of London's funkiest clubs in the 90's "The Cat in the Hat" made me punk-dive for the first time. At Wembley stadium for about three seconds I held onto his smallish no-label yellow jacket, before some hood wrenched it away from all our sweaty palms. I guess he wanted it more, but he did let me try it on.

No doubt they'll be ooming and umming in the music biz about Prince's dishonour, but expect many other artists to follow suit. It's simple: the net, Myspace, whatever, give an artist direct access to us and that's what every artists wants. No doubt also the music bosses will want to woo back Prince to the table for a better deal with his next release. Not a bad strategy Mr P.

In one year Prince becried how he wanted to just get his music out but his mighty label, with the law of supply and demand in mind, wasn't having none of it.

So next week a Jag with the Sunday Times, a diamond encrusted ring with my cornflakes. Welcome to the third way or as Harvard Review would write this quarter, the integrated approach. More on that on viewmagazine.tv

Meanwhile, I'm off to listen to Prince and incidently talking about amazing artists get some of this: Nancy, abs fab singer songwriter with an a generous and groing base.
+++++++
5 hours later... Ok for the mean time the ever prescient Prince has pulled another anthem. As with 1999 that got wheeled out for every occasion to mark the millennium, Planet Earth the first track will become the trademark for all that's wrong with the planet. It plays around with old Prince and something Isley Brotherish. Expect to hear this played to death, unless the planet and everyone dies first. Urggh how morbid.
Posted by Dr David Dunkley Gyimah at 8:41 am

Anonymous said...
This comment has been removed by a blog administrator.
12:41 pm BST

The fact is that a musical genius of Prince's stature does not have to pander to record companies. The payment from sold cds would probably take a long time to trickle down to him and moreover, he probably wants to appeal to a wider audience and probably finds more creativity in performing live!! His latest album is very good and very eclectic. All the songs are different from each other. There's this song "All the midnights in the world" which is especially charming.

Check out the lyrics of Prince's latest song "All the midnights in the world". Simply amazing!!! Check it out on my blog.
http://gabriella-theglasscastle.blogspot.com/

I couldn't agree with you more. In fact that was part of the dispute with his record label.

As prodigious as he is, he wanted more of his music out there; his record company wanted to control its flow.

Late 90s or thereabouts he did start selling from his site as well.

And like you said also his appeal is just so wide. In the late 80s/early 90s at places like the Wag, Cat and the Hat, Legends, you only had to put him on and this crowd went wild.

Then over at the Hammersmith Palaise ( yes I went there too -woops); different clientelle,but the feel for his Purple one, was the same.

Cheers ! I'll whizz over to your blog for a listen