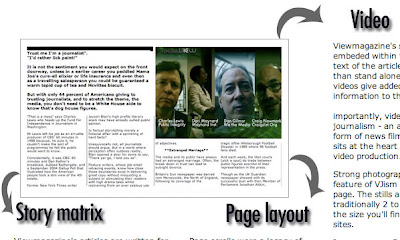 ONA meeting at the BBC showed the BBC technology wing experimenting with different video forms, particularly with embeded video in the text. This is a feature that is becoming increasingly prominent. This august at least three national newspapers will be embedding video in their articles.

I must be careful I don't come across all knowing. No that's not my intention, but embed video was one of the ideas used in viewmagazine.tv for which the good people at the Batten Awards judged the site.

The BBC trials are prerry expansive and imprssive with a dedicated video producer for online part of the set up . Jemima Kiss at the Guardian wrote this of the meeting.

Kathryn Corrick, (her facebook here) delved into the world of web anayltics with some impressive new tools and I had a go at showing some of the areas I believe emerging journalists ( Masters programme) will occupy.

I shot a piece from the meeting and ordinarily would have posted by now, but I'm pretty tied up with meetings and final student projects. Yes even though it yakes me about 20-30 mins to cut a piece, it's the motivation. Sorry! But I will get round to it so you can see/ hear some of the excerpts from the meeting.

Meanwhile a couple of pages on viewmagazine.tv give some idea of my thoughts where I beleieve there's acres of innovation.

8 Days is being polished and the thing driving me at the mo is IM6 Videojournalism - a sort of extreme video journalism. It's in its incubation stage but this should give some idea.

Also talk of gatherings, this network has a lot to say for itself.
Posted by Dr David Dunkley Gyimah at 12:09 am