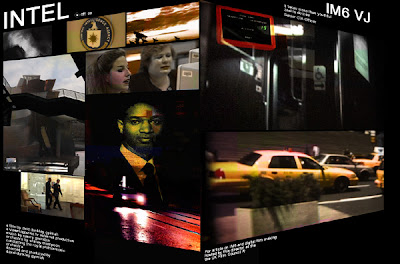 An early model included this, The Family, taking a doc and distilling it for the web in spatial form in 2001, but with more bandwidth I can now experiment with this- a rubik film cube through IM6. It's no where near finished. I'll add to it over the days/weeks.

Lev Manovic who is to New Media what Mchullan is to Global Comms touched a nerve talking about the narrative form of film makers harking to the Greenaways - experimentalalists, auters who massaged function and form.

Some of those ideas congeal into contemporists: Minority Report, The Matrix. Momento. Film theorists will quote BattleShip Potemkin as a crossroad: revolutionary then, and still fresh now.

Some of the most exciting directors now e,g, Paul Greengrass (Bourne trilogy) The Scotts ( Man of Fire/ Black Hawk Down) transmorficate documentary and photojournalism into photo reality films that are "dirty"- no clean line of sight.

Just look at the trailer for ghosts of citesoleil.com a searingly disturbing film with searingly daring film making.

Is video journalism really a new profession? Perhaps. Can we really define what its is? Does anyone care? All the audiences wants is to be pulled down the rabbit hole. To be given their monies worth. So whether its vjism or not it's about pushing the end. And on the Net I believe there's no compromise. Until the web becomes the main platform (when??) producing online can't simply be about transposing TV's DNA. It has to be something more. We should be able to experiment. The medium asks it.
Posted by Dr David Dunkley Gyimah at 11:00 pm