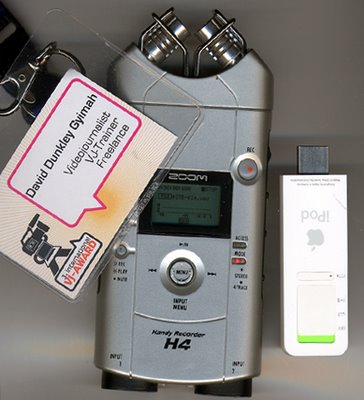 I had in mind today to speak to someone I have a lot of respect for after sharing a podium with him in the US last year. Naka Nathaniel works for the New York Times, as a Video Journalist /writer etc and is just about to set off to Dafur.

This time with his correspondent Nicholas D. Kristof, a columnist for The NYT they're providing a piggy back for NBC. Naka and Kristof have been to Dafur a number of times and its mightly encouraging to see that his newspaper continues to bring news of the region to its readers through Naka and Nicholas' efforts.

I started off recording the session with this contraption above. It is state of the art mp3 and if you've ever used a uher before this really is like way beyond anything.

Half way through however and the devices capture card gave up ( hahaha ) I hear you snigger. So we switched to skype and a nifty device called audio capture that allows you to record sound coming out of your mac. The free version only allows ten minutes a pop, but its worth a future investment.

So to the questions.. Naka talks about video journalism and a question being adressed by the Front Line Club about freelance journalism and the future.

Join in the debate nearer the time when I hope to put up a range of views forward for us to discuss.
Posted by Dr David Dunkley Gyimah at 8:03 pm