Long way up and a short fall down 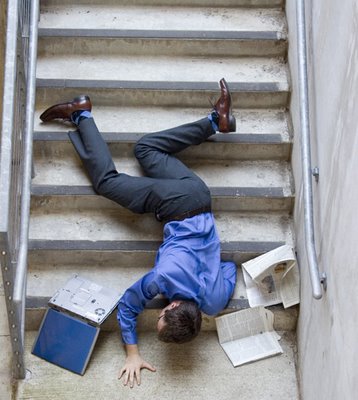 Be careful what you do climbing the media ladder, cuz it could lead to an almighty fall down

Not as many articles this week on viewmag as I would have wanted to, but a busy week and even busier next, when I hope to introduce an aspect of the outernet onto view that had me jumping up and down like a three year old.

Thursday was interesting, the debate about technology and freelancing at the Front Line Club, chaired by CNN's Christiane Amanpour. Hoping to post this soon after some work on it. Name dropped a good friend into the debate, Riz Khan - a keen advocate of digital technology - and now one of the big names at Al Jazeera.

When I got home I emailed him and then what emerged from our emailings to and fro was a story he kept modestly quiet about. We spoke about technology and programme making while editing a programme about the Hajj one evening and he mentioned "Oh there might be an Al Jazeera international".

Might be!@$$%$% It now emerges he started it all... well AJ approached him and he sounded out a few people, got in contact with an old manager friend and the rest is history. Humility... If you've ever met Riz, you'd understand. He'd walk into a room unassuming and beam with an extended arm the words: "hello I'm Riz Khan".

The fact that he was interviewing Bill Gates or some president earlier makes no difference to his attitude and "joe-us".

It is a lesson indeed. As journalists, seen on TV or what have you, we are no different from anyone else. The shop keeper sells essential commodities, we sell information.

But as we walk throough the corridors of this profession, we meet those who believe themselves too worthy of anyone's presence other than similar celebrities. Ah well...

And so off to aerobics again and then back to finish off a chapter on my nameless book. Hello to you if we met at Front Line and a hearty thank you to those that organised it all
Posted by Dr David Dunkley Gyimah at 9:49 am