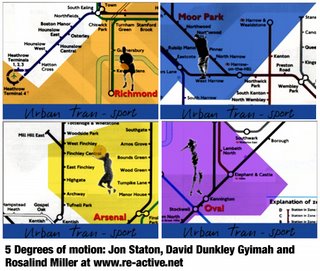 It was a while coming. In 2000 Viacom UK contacted myself and colleagues to help them fashion a new kind of advertising. XTP would revolutionise the Underground. Our task was to visualise 5 degrees of motion. What?

Simple. On the one hand varying degrees of animation and movement would mean different revenues, but also equally important the implications of a moving ad on the Underground have serious health and safety aspects.

So we experimented with a few ads under the guidance of Viacom UK and came up with five ads pitched at Imagination's HQ. I'll be featuring an article on this on www.viewmagazine.tv with all the ads at the time and how we came to develop them.

The stills here are froma video where we developed the brief of sporting london. Jon Staton, former head of TV at Saatchi and Saatchi could find a helicopter at short notice of you wanted one.

In this case something less adventurous, we hired out some studios and I directed a couple of sports men and women in. We then comped that in After Effects

Gosh 22,000 visitors to www.viewmagazine.tv - and I have the Berlin awards to be thankful for that. I'm going to be posting some more stories from the awards soon. Tomorrow hope to be interviewing Naka Nathaniel about video journalism in expectation of a Front Line Club debate on technology and the future.

One of my closest mates from Medecins sans frontiere has brought over the most strangest looking device. You'll see it tomorrow. It is the future of podcasting and MP3 and looks like a stun gun.

And finally Westmins postgrad journalists are on the verge of something. But this is strictly Chatham House rules so that's all I can say
Posted by Dr David Dunkley Gyimah at 11:31 pm

its a real interesting concept...
It would bew reat to be able to do this things