The Future Moving Image Makers - Videojournalism inside tips from Viewmagazine.tv

If you're familiar with this blog and  viewmag, then you'll know that since 2005 it's been sharing ideas on videojournalism.

In the last couple of months I have been writing a taxonomy about non-fiction making and wanted to share one theme with you, which gives you a flavour of the text.

From the many memos and contemporary documents I have been examining I came across a five page memo from one of my managers, who wrote this:

"Sometimes they will shoot on-the-day stories to back up a breaking news event. Sometimes ( and I used the example of  Leah Betts) all four might have to drop what they're doing and pitch in to get the stories for an on-the-day special".


Leah Betts was the tragic story of a young girl who took ecstacy and died in 1995. This paragraph that I have lifted from a 1995 Memo sent to us videojournalists is profound in many ways, in what it meant then almost 20 years ago and what it represents now. Nick Pollard, the originator of the memo, would become the head of news at sky a year later.

Firstly, that the videojournalists worked on the day to turn around stories is common knowledge to most practitioners. What it doesn't reveal is that VJs would file in around three stories a day.

That aside, if you're able to do that now there's a sense of epiphany you develop approaching a story, in which rather than being complicit with what you know, you approach a story suspicious of what you don't know, and what you're being told.

But the idea of having four videojournalists work on a story is the gem and was used on the IRA bombing of London and other stories, but in a particularly co-ordinated way.

Now when the videojournalists were not working disparately on a bigger canvas story, they would be in close proximity within the theatre of the story and that meant understanding and coordinating what the acting profession calls "blocking".

This involves where you want an actor to stop, so you can place another camera to provide a different view point and a continuity of sequences.

Sounds simple enough, not getting in each other's shot path, but it was understanding what frame shot to pick up when you're colleague left the image, that was the interesting event.

The idea of different view points which surfaces between Edwin Porter and DW Griffiths in the early 1900s is one of film makings most eloquent and amazing developments and its held steady since, with more elaborate multi-shot angles devised, except in broadcasting which due to the costs meant one camera, one person.

So going back to the Memo, Nick Pollard has found a way for the videojournalists to act as ensemble directors picking up different view points for one production.

Yet what if you work for an outfit where you don't have enough videojournalists to simulate, here's the stylistic breakthrough

As a videojournalist you'd do well to understand multi-camera shooting, in which YOU operate a number of cameras. On the shoot I did for the Southbank and dance company I used four different cameras, placed strategically to minimise blocking. The picture above gives you an idea, as does these below working with Nato, and then my first Mac back in 2000 working with two cameras. 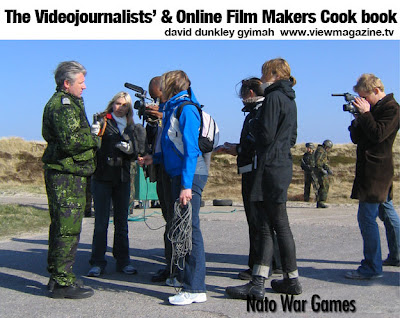 While the camera is the capturing device, what is significant is your understanding of spatial thinking. Where should I be, how does that orientate the viewer, what's the significance of the next shot?


Because, and this is the singular theme from all this: You're speaking through the art of spatial compositioning which placed on a screen is a film, within a building is architecture, and a fixed canvas is design.


What therefore do I conclude: 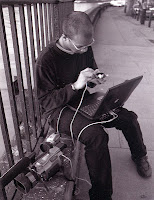 Posted by Dr David Dunkley Gyimah at 9:15 am