To the things they are - Journalism. How we shouldn't teach 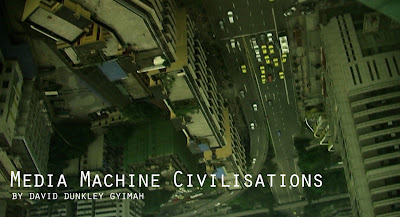 WATCH THE FILM-REEL ON VIEWMAGAZINE.TV

The question was asked and produced the cacophony of predictable responses. "To show what's happening", "to root out corruption", "to inform us".

Asking what the purpose of news is, is the equivalent of tatooing your forehead with "imbecile". It's puzzling and denigrating to you and the great doyens of the profession.

As a former broadcaster, who still practices independent videojournalism I could be equally irked, but I have an itch that requires scratching.

So what's the purpose of news in the media machine age?  My thanks to Paddy Scannell whose ideas have catalysed my own. [fade to black]

A hypothetical experiment, for it can only be hypothetical imagines, like the crew of Aliens, we awake from a deep coma to find out we live in a world such as this in which various technologies exist, such as this, and that we try to describe what it is we're faced with by building knowledge that has not been filtered through others.

Michel Foucalt referred to it as discursive formation. It is when, say, a new technology is formatted around  the institutional settings of a previous technology. Hence an expressive ingenious creative form such as twitter becomes redefined by the act of (instant) broadcasting, when it had a previous aim.

This embodies the train of thought employed by phenomenologists who urge us to look at things the way they are, and sadly phenomenological enquiry is not practiced within media according to Scannell.  In the 1970s academics opted for sociology - studying forms within society - but you the individual, forge-labou-it.

A super academic word, phenomenology, it seeks to understand the world by asking questions about everyday things, which we often take for granted. You can trace it back to the daddy in Husserl, but more contemporary experts include Harold Garfinkle.

To gauge a meaning of phenomenology, place a teenager next to a baby boomer who has no knowledge of the new machine world or for this sake is like one of the crew from Aliens - they've been asleep for a while.

The teenager assumes the world was always googlable. The baby boomer remembers a world without instant search and the machines world's acceptable Tourette's writing syndrome - Twitter. The baby boomer learns by assimilation, and what if that boomer had a fertile skeptics brain?  What would she make of twitter?

Now this all sounds terribly dense and academic, but I'm not the academic type and I'm neither looking for dense debates.

Journalists are taught to be objective and rightly so, a position valorised in the late 19th century to stop this band of new professionals, calling themselves journalists from lying to readers. You must be objective.

100 years odd later, the chorus is there is no such thing as objectivity; like the emperors no clothes, it was an illusion that held.

What he says is equally interesting, in that objectivity was never meant to be dissociated from personal feelings, it just happended.  Here comes the fascinating thing now. If you ask a 100 journos what they think objectivity means, you'll more or less get the same answer.

The meaning of things
Foucalt's discursive formation is at work again. We know what we know because often it is filtered to us from the fruits of a tree that at some point became poison. So you ask the question: what does objectivity mean, and what you realise is that even if the word has not changed, the conditions that we live in from 100 years ago have.

Scannell makes a point in his writings that suits me too. It's not I'm claming to be clever, oh nooo, but when conditions change, its beholden on us to find ways of adressing those changes.

So even as Ward states the word has not quite been interpreted correctly, in today's machine world we need to look at the word again. We need to perform phenomenology.

Why this matters, not the example per se, but this way of thinking is because it orientates us into considering things we should not take for granted.

That is to look at journalism in ways that ask what is it meant for. Or if that sounds too existentialist to start educating a generation where they question what they're told.

At the very least it revives a "get out and find out" attitude. You want to know the facts, go and find them.

This is precisely what videojournalists did almost 20 years ago with television. They asked why should it take on all the things television does.

Now in case you thought that question is a imbecilic, I did some work with Ghana TV some time ago and was quite taken to discover the management looked on television as a socially cohesive force.

In the Machine World, journalism and many other professions require far more actioanable thinking than we might think, without being wedded to Occams razor - which is the path of least resistant thinking.