Why it's a great time to be studying...but there's a catch 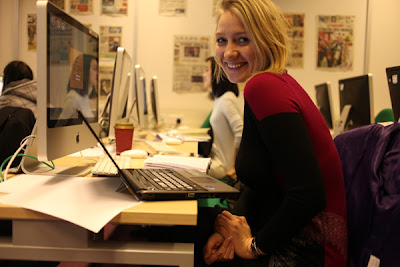 The statement, why it's a great time to be studying, could frankly apply to any period.

And I'm not only inferring students only at academic institutions, but anyone. In reading this, it could easily be perceived as one of those pieces, proclaiming hope and love found within the leaves of the glossies: "why it's a great time to get fit". I didn't have that in mind, so what's the beef?

In times's of conflict, often economic ruin, on a macro and personal scale, human endeavor creates new solutions to old issues. There's pain indeed, but the phoenix to arise is often a mutated form.

You look within yourself and make a choice that is procured for others. New ideas are fostered and fresh ways emerge for dealing with once recalcitrant problems are on the agenda. The Seattle protest against WTO is a grand scale expression, Journalism which grew so fat it couldn't see its feet is another.

Within ourselves, our personal strifes continue. Four and half years ago , I embarked upon a part time PhD. It has been to say the least a painful, bitter sweet experience; the equivalent of being struck in the groin with a football (soccer) that richochets into the opponents goal.

Wow, we've scored but we're still 4-1 down, and the pain. The result of the expedition and it's by no means over has been an accumulation of new ideas. I'm no longer the entrenched rhetor; there are other sides that require a dialectical approach.

Also, what I once perhaps vehemently thought was new has turned out to be the most magnificent of card tricks. Look what someone else did earlier. Academics may on ocassion fight one another over turf, as do academics and practitioners, but at some point that something becomes the persuasive elocution of the argument based on a grounded approach.

I don't like it because it's red, is a personal cognitive attribute, which doesn't advance the thought thread. Find something deeper.

More often than not, and our Masters students are privy to this; lectures might often turn from a practice of spatial awareness to a philosophical enquiry- not because of a need to be clever, but to refine a point. Any mode of studying is about finding ideas to the point where they start to thread together.

But where do these ideas come from?  The catch I mentioned above enters stage left. It's a great time to be a student because of the flux of ideas and the ease at which they can come, repackage and dusted down from the net.

And whilst most ideas spur another, quickening to a chain reaction, it's how we mine and dig into the "original ideas" that matter. What you might say is theory, which is an institutionalised accepted norm from a proposition that has stood up to scrutiny.

Theory is not the same as assumption, though that helps as well. The catch - the ideas, the theory needs to be grounded. Pop ideas may provide a partial warm blanket, even give you the fashionable start of a trend, but be careful with them.

Reading a book, which extemporises design, having a conversation based on prior knowledge you've acquired with a crowd or the new educationalist matters. New educationalists are the increasing number of lecturers I'm finding who are practitioners and theorists.

Our Masters students are due to launch their sites quite soon, wrestling with those seemingly intractables from a standing start. And around education world tens of thousands, if not 100s are gaining an experience.

It's an exciting time because whether you're in NY or Queensland, things don't have to be the way envisaged by the baby boom architects. I might have written this in 2005, that you can bend reality. But in 2005, we could not fathom where we'd be in this digital whisk.

More so, than 2005, it's a great time because nothing looks remotely like settingling down, and it's still looking like the era for new, radical ideas. Time to get busy huh!
Posted by Dr David Dunkley Gyimah at 4:36 pm