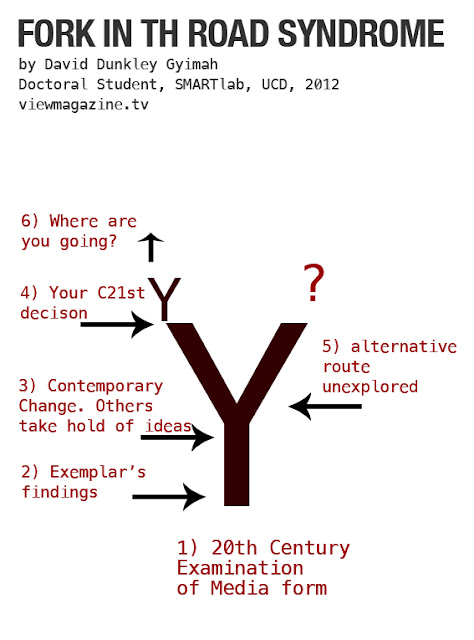 Admit it, you're no more interested in what happened 5 years ago, than you are 60 odd years ago, when vast swathes of the media was taking shape.

But there's an interesting phenomenon, which I keep encountering which I'd like to share with you and why those yester years really matter. I have illustrated it with this oversimplified diagram.

1) It goes something like this. At some point in the 20th century or before, or lesser so now, an individual (an exemplar, genius) or a group, often unconnected, discovered something. Let's say in this case television.

2) A number of key figures then came up with their findings that suited them for personal reasons that they would share with others. Television news producers terrified viewers would turn away from their reports if they were longer than 2 minutes kept them short and snappy. They also devised a number of highly relevant schemes for the time, such as how to make a report. The TV equipment was heavy and cumbersome so it shaped their thoughts to keep the camera steady.

3) These key decisions determining television became sturdy and contemporary. If it's not broken why fix it.

4) Then you and I came along. What we observed as contemporary features suited us fine. They had to be true and meaningful, otherwise everyone else would not be using them. It's like your grand mother and father telling you a story. It's true, but it doesn't mean we too need to go and find bicarbonate of soda to clean are teeth.

6) We then decided, based on what we'd observed that this is how things should be and where they're going.

5)  Except that we'd missed out point 5) which arises because at the point that the exemplars (clever people) made their decisions, which were often correct, and before they became contemporary, a number of things changed. What's more, the people who often adopted forms from exemplars had different ideologies from the exemplars.

Why it's all different now
Society changed, the ideology of those who often pushed what the exemplars knew were different, culturally, we've grown, technologically the camera's no longer heavy, and philosophically a range of the original theories or even guidelines have been questioned.

Someone asked the question: what's the appropriate length of a video online. To answer the question, you either conduct your own research, which can be time consuming or expensive ( not really!) or you take heed of what some other clever person is saying. But what you can't say is, just because it was like that before, should be the reason why it is now.

What we know, is only as good as the period it was often devised, and some. Some of the exemplar features ground everything there is today e.g. the motor car, but to understand the true nature of the forces of change and how to get by the new experts, we need to go and talk to the exemplar.

There's a lovely point in the film The Facebook, and whilst I know its fictional, it may just have worked this way when Mark Zuckerberg figures out what people want to see. They want to know about each other, his character proclaims. Zuckerberg the exemplar of his time based his thinking on what people before him, such as Hobbes had discovered in the 17th century about social networking.

Now a brief point, the exemplar is not fixed in a time zone. They exist now as they have over the years, but what separates the exemplar is they started from scratch, with no readily available, prior concept, or already made creation that they mimiced to launch their idea.

And that is the Fork in the road syndrome.

The next time a media expert tells you something ask them how they know :)
Posted by Dr David Dunkley Gyimah at 11:37 am