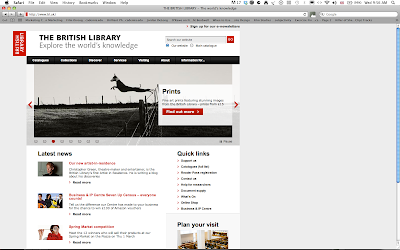 In your field of vision 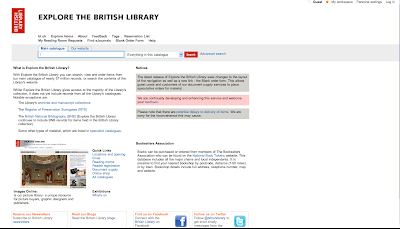 then this second page - but how do you log in
The British Library has produced a new website.

It's probably a couple of months old, but it's the first time I've returned to the site in a while.

I'm registered so I wanted to order a book in advance.

Then the fun began. No matter what I did, there seemed to be no easy route to register. I'm stubborn, and being a designer myself persevered.

Nope. I could find things like requests I made, but I hadn't made a request.

So after 20 minutes I gave up and rang.  The customer service woman that answered was, as always, incredibly polite.

The Library conversstion - shhhh
I'm having an interesting time trying to log in, I said.

Oh yes, she said it's tucked away.

Go to the front page click catalogues, then explore the library. Now if you look to your far right, can you see log in.

Ah yes I replied. But it's not an intuitive place to put it, I added.

No, she said, apparently that's where people expect the log in.

I'll break here and give you my analysis before going back to the conversation.

Whether cognitively or using semiotics, the coded way for western readers is to go from left to right. And the British Library knows how dominant  usability flow of left-to-right is because its interactive logo is placed bang on the left.

Curious then that it should place log in on the right separated by a sea of white space. The white space and singular line are effectively back grounded, because all the "active zone" is centred within the frame work of the main body of the site.

What's more when you're looking for something you develop tunnel vision, meaning your peripheral vision is only really active when something moves.

It's the reason magicians can pull of tricks. We're so hardwired to be focusing on one thing, that they know they can pull a trick and you won't notice.

The result of all this, is that the "log in" is outside of  your plane of vision. Step back because you're making a cup of coffee or a friend is sitting next to you and it become apparent. Doh, but on your own...?

So back to our conversation.

Oh the designers say it's always on the right, she said.

Nope I disagree and relayed my logical approach.

Had any complaints, I asked?

Quite a bit she mused, but then added, well when other people see it they say of course.

We're creatures who don't like change, so some of that possibly bleeds into this deduction. Yet on the other hand, there is no fixed place for a "login in" being on the right side of the screen, particularly as one line separated as it is.

If a designer says so, ask to see the evidence.

The British Library does have a good fall back decision, because once you, a registered reader know where it is, you'll not make the same mistake. Design flaw taken care off.

Ultimately, the issue is an interesting one in light of the diversification of the Library. No longer a place for woolly jumpers and tweed coats to read, its a bonhomie of an outfit finding new ground.

Hence something has to give. We're a resource now, not  a library. Right time to go and register for that book
Posted by Dr David Dunkley Gyimah at 9:56 am