Know what you want, don't be afraid of rejection and be nice to people

"Know what you want, don't be afraid of rejection and be nice to people".

It's an aphorism that sounds like a humanist religion. For Yixiang its come to define how she's made her journey from determined MA student to a confident professional in the space of two years.

The former Westminster University student cuts a diminutive and slightly nervous figure delivering an impromptu testimonial of her life to this year's cohorts.

And the journalists-in-waiting kept her on point fielding a number of questions: what modules did you do? When did you learn financial journalism? Why did you do an NCJT course again?

If she could, she would have preferred to be seated listening to some other speaker than being the centre of attention herself - a touch of the imposter syndrome. Humility is one of her other endearing qualities remembered by the journalism lecturing team.

But such is her story, how a shy Chinese student fought to find work from one British media establishment to another: the BBC, The Financial Mail, Euro Money, that her story begs to be told. "I got a lot of rejections, a lot of rejections, but I believe if you really want to do it, you will", she says.

Yixiang's beginnings
Deborah Vogel, the course leader for the University's MA Journalism programme recalls the early signs of her now characteristic focus. On the first day of contact, says Deborah, Yixiang had prepared a shopping list of questions, she had clearly given much thought.

As one of her lecturers, Yixiang surfed under the radar for the best part of the first semester. In the second semester she opted to the online module. The running joke for online from Masters students is   "you will die and be reborn".  Apparently it's something I said in jest which took off.

However, because of the volume and nature of work the joke wears out very quickly. Students have to believe they can take the pressure of design, coding, writing, multimedia, whilst committing themselves to understanding technical and creative aspects of various softwares.

The close contact working with colleagues, sometimes enacting Soho Dotcom's Death March, means its not for the shrinking violet or those wanting an easy ride. You can't be shy working online in a team. So, Yixiang might have crossed my mind.

However two months in Yixiang wanted to meet for a problem. She had already consulted the "wisdom of crowds";  she was applying for a BBC online internship and wanted help writing the application, and only had a couple of days before the deadline. I asked her permission to use this email below.

from yixiang, many thanks

I want to ask you that tomorrow could you kindly share some time with me discussing my application. I will have interview on Thursday.
I will bring my web critique and some other question answers, hope you could have a quick look, and comment on it.
Here is the link for the programme I applied:

www.bbc.co.uk/london/content/articles/2007/02/19/step_up_feature.shtml.
You might be very busy, but I really need some help, and your suggestions and comments will be useful for me.
I thank you in advance
yixiang
I passed the ball back to her to write it up first, so by the time we met and bar the odd change and how you sell yourself online, Yixiang had prepared a meticulous document pulling everything she had learnt together.

After three filtering processes and a day's long interview, she got the position. Look up the link and see how you might fare.  By now as I documented in this blog post back then, Yixiang was becoming a women possesed - something we've had good laughs about.

What followed within her internship was an extraordinary balancing act of working with the BBC whilst meeting the course requirements for the MA programme. In her final project Yixiang decided on creating a site to showcase the talents of concert pianists at the world famous Royal School of Music. Pianism.co.uk has since come down from the web.

Perhaps it's the less spoken about fact that she is an accomplished pianist herself or that she wanted to shine a light on those she admired. Either way after three months she emerged with a website which would earn her a distinction.

It wasn't without its difficulties. Some of the pianists in emails were plaintively rude, but Yixiang shrugged of any rejections and got on with the task.

Graduating
After graduating as any student will know came the hard slog for work. Yixiang got into selection panels for the likes of CNN and along the way accrued her fair share of rejections.

However she had made a decision, a plan she was keeping too. Going back to China was not an option, so she was intent on carving out a career in the UK.The thought led her to enrol on an NCTJ  print course where she buried her head in law, public affairs, shorthand, and local politics.

The University of Westminster's modules are based on the NCJT, as well as the BJTC - which it still looks to for accreditation, but Yixiang's quest was to specifically understand the Brit market with a desire at the time to work at a local level. 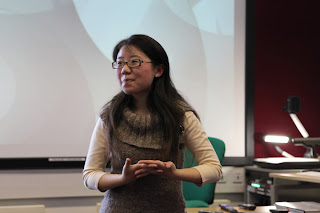 And then as she puts it she was finally brainwashed. Working in local newspapers and contributing to the university's much vaunted online newspaper,  HA1, a competitor to local newspapers,  gave her the sense of how community news worked.

Anyone who has worked in local news knows the benefits of getting your hands dirty. I recall my first radio piece for BBC Radio Leicester in 1987 when I mispronounced Groby as Grow-bee, when it should be Groo-be. I spent 6 hours trying to figure out overnight at the station how to change and record that one word, before it got broadcast. I survived and spent three years on and off working the local beat.

For Yixiang the sum total of her past was about to come to a head. Along her journey other jobs would open up: the Financial Mail and The Independent where she did a stint as an award. And as she puts it, anytime she visited Harrow she had a mission. "I'd be thinking of a local news story and how I could pitch it to the local newspaper editor, with a different angle", she says.

Pitching is an exercise at the University we place a premium on. If you can't pitch, you can't sell.

Today the story of Yixiang is about to take a more interesting and highly fruitful turn - Hong Kong.

It doesn't get any better than that. Yet the principles that underpin her rise are as unpretentious as she is.  There is no magic bullet to making it work. As one of my mentors put it, every rejection letter is one step closer to the job you're after.

Or as someone who inspires me, and hopefully inspires you too says...how does it go? "Know what you want, don't be afraid of rejection and be nice to people".

Postscript: As I was finishing this article, an email from Yixiang's prospective employer marked "confidential" landed asking a range of private work-related questions. You can't imagine what I might have said, can you? :)