It is anything but. For the Royal Navy it was the machine that would play a pivotal role in deciphering  Hitler's war machine in WWII.

In the 90s a reporting assignment brought me in close contact with the iconic device. Today the BBC and producer Julian Carey broadcast  a programme celebrating the wider achievements of Britain's code breakers.

Code Breakers: Bletchley Park's Heroes was a well put together doc - a history narrative with stylised visuals and contemporary footage. One of the programme's contributors commented that these extraordinary code breakers were misfits, dysfunctionals, academics who were the unlikeliest heroes and even now the full facts of what they did cannot be told.

However I took to the programme for other reasons. This morning I had to present to my colleagues at the SMARTlab University College Dublin about methodologies for deciphering a research conundrum.

I mapped it out, but all day the data analysis has been weighing on my mind. Just as well then, because half way through watching Code Breakers: Bletchley Park's Heroes, their own work sparked an idea which could be used in pattern recognition.

I'm no Bletchley boffin. Oh no, but if their techniques are transferable, then with my own distant Applied Chemistry background it's worth a decent shot. Weirder things could happen.

Broadening this thought, one of the areas I believe will be a huge growth point for video makers and videojournalists will be interpreting data into story narratives, just as you might have come across in data visualisation.

This opens the prospect to construct rich meaningful films to reflect studies and research from companies and non-broadcasters in ways that allows any viewer access without, the feeling of reading a research document or watching a typical corporate videos
such as this one from IBM.


8 days, and more recently Tahrir Memento on viewmagazine.tv are examples of films which have ulterior motives. They are videojournalism films in themselves, but have secondary messages. In the coming weeks I'll post links to other stories on viewmagazine.tv on the page below which double as stories and research projects. 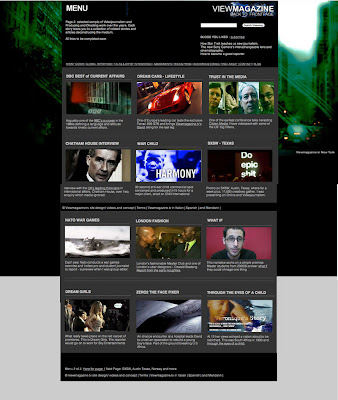