Condition ONE now on the Front line of Wars

Series of articles on the Future of Online content 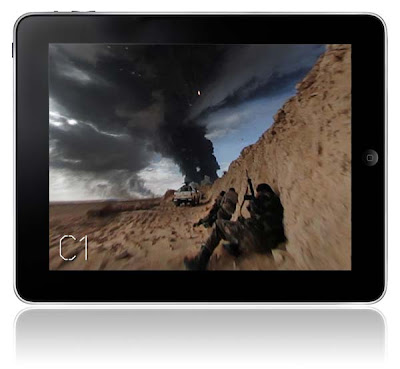 Released October 21st, Condition ONE, a game changer in visual story telling for the IPad
The student's question was a valid one. What does front line reporting do to enhance the story being told? 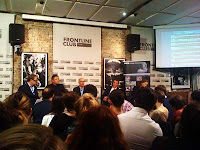 Inigo Gilmore, an award winning videojournalist, and one of four panelists at London's Journalism hub, #frontlineclub, discussing war reporting, got it.

Where reporting follows the frontline at the expense of backstory or context, it diminishes knowledge of reporting conflicts: context, human sufferings, the spirit of citizens trying to live within the chaos, that sort of thing.

My response was a little more allegorical. Following the question I tweeted the ff: 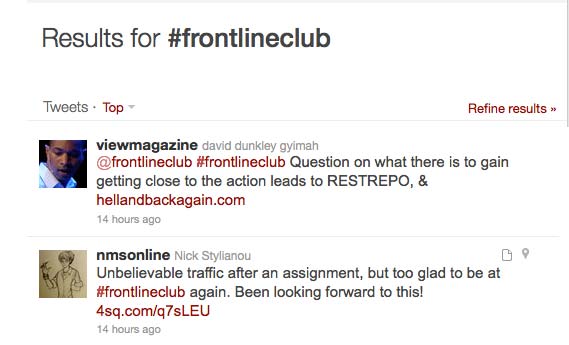 14 hours on had I been in possession of a press release that dropped in my email today I would have been reminded to expand on #frontlineclub the author of hellandbackagain.com - Danfung Dennis.

Six months ago I posted on Danfung's breakthrough application Condition ONE which was set to bring  a fresh hacceity of reality to war reporting et al. Today that app is imminent as a download.

What does it do to war reporting? Here's the experience- a transfixingly enhanced aesthetic.  War, as never seen before - as close to its brutality and ugliness as those on the ground see it.

New levels of information denied you in previous television, cinematic of web-based films - a combination of panoramic scope and seeing in HD  fields of vision we take for granted in our normal periphery vision.

So to the announcement. Ordinarily, like many journalists I'm reluctant to publish full press releases, but in this rare case. This is what it says below:


My Freedom Or Death - Condition ONE Beta from Danfung Dennis on Vimeo.

“Condition ONE offers a full spectrum enterprise solution for media companies needing to innovate and capture an audience in the rapidly emerging tablet market,” said Condition ONE Founder and CEO Danfung Dennis. “Condition ONE has created a new type of video technology to lead media companies into the tablet market. We merge technology and creativity and push the limits of visual content to create immersive experiences on tablet devices.”
Danfung Dennis conceived the Condition ONE technology while covering the wars in Iraq and Afghanistan.  The traditional image was not enough to convey the realities on the ground.

The Condition ONE app gives users the ability to look in any direction, giving a visceral sense of ‘being there’. By pivoting and tilting the iPad®, one literally manipulates the corresponding field of view. The highly sensitive motion controls produce the illusion of looking through a window into another reality. Condition ONE will offer highly engaging storytelling with a focus on visual content conducive to being experienced firsthand.

“We were thrilled to be selected to present at the LAUNCH ‘PAD Tablet Conference and while Condition ONE is creating a new medium through technology, powerful content is at the core of the Condition ONE application,” said Co-founder Karol Martesko-Fenster. “Condition ONE is focused on rapidly expanding the companies next generation product offerings: a proprietary tablet app, an immersive camera system, a streamlined workflow, advanced post-production technologies, and an immersive video player with a highly engaging interface.”
Media companies can license the technology and embed the immersive platform into their existing apps or create a branded channel within the Condition ONE app.
Condition ONE is currently compatible with the iPad 2 and becomes available for download from the App Store later this month.


About Condition ONE LLC
Condition ONE LLC is a technology company developing next generation immersive video applications enabling media companies to move into the tablet space. Condition ONE combines the power of the still image, the narrative of films and the emotional engagement of tactile experiences to create a new immersive language that shakes viewers out of their numbness to traditional media and provides them with a powerful emotional experience. Instead of opening a window to glimpse another world, Condition ONE brings the viewer into that world as an active participant. Condition ONE's co-founders are CEO Danfung Dennis, COO/CFO Peter Sung, Creative Director Takaaki Okada and Karol Martesko-Fenster. Contributors and advisory board members include, Ross Kauffman, Vaughn Smith, Patrick Chauvel, and Ryan Uzilevsky.
http://www.conditionone.com
On Facebook: facebook.com/ConditionONE1
On Twitter: twitter.com/Condition_ONE

About LAUNCH 'PAD
This one-day event at Microsoft's Conference Center in Silicon Valley brings together 25 of the most important companies and app-makers in the tablet space to demo their products, share lessons learned and discuss issues like product design, UX, business models and marketing. Over 200 developers/product managers receive free tickets, with just 50 tickets available to the public and select press. LAUNCH 'PAD is the first in a series of one-day events leading up to the signature LAUNCH Conference on March 7 & 8 in San Francisco, where 40 companies will launch or launch new products on stage.
http://www.launch.is/launch-pad-tablet-conference


This is a story that has only just begun. I tested the product at the Sheffield Doc Fest where I shared a platform with Danfung, so I hope to bring you more on this. Not least that it will have implications in several fields of media.

Former BBC and Channel 4 News  journalist David Dunkley Gyimah is the recipient of a number of awards in innovative journalism. He's worked in the journalism since 1987 and is presently a senior lecturer at the University of Westminster, PhD Candidate at SMARTlab on Future News, University College Dublin and Artist in Residence at London's cultural hub, The Southbank Centre.