Why do you wanna be a soldier?
Because I wanna kill people.

This and other mind-gnawing exchanges emerge from  Hell and Back Again (2011)   one of many memorable days at the 2011 Sheffield Documentary Festival. Thus far the film has punched through the independent cinema festival circuit garnering accolades and awe, as well as awards.

The World Cinema Documentary Grand Jury Award and World Cinema Cinematography could just be middle-layer, because you suspect the topping could be the Big- O, though Hollywood's predilection to narrative -issue NIMBYISM, doesn't bode well.

Twenty-five year old Sergeant Harris says in the film the army's recruiting team said that was the best answer they'd ever had.


Hell and Back Again clip  Danfung Dennis on Vimeo.

Off limits
There is a conversation that resists being shared when going into conflict. Individually, it weighs on your mind, but you don't speak about it. In any case, skill, experience, maturity and providence are meant do their job.
I believe I know this because I grew up in a country which was shaken by military coups: Ghana, in the 1970s and 80s and that much later I would re-locate to South Africa, reporting at the time of its taut transition from Apartheid to democracy.

David reporting from the troubled townships of South Africa. A freelance report broadcast on the BBC World Service circa 1992.

Yet, comparisons to Danfung's Hell and Back Again, though relative, are diametrically starkly different.

At the Sheffield doc fest, in conversation with Beadie Finzi of C4s BritDoc Foundation Danfung is peeling back layers of the "how" and "what" for Hell and Back Again and the result gives rise to liminal thoughts about "this conversation".

The audience learns how Danfung, a photojournalist already embedded with the US army is looking to be dropped with Echo Company going the farthest into Taliban territory.

The soldiers were destined to be there "for a long time", and the intel and hollowing emerging from later  arms exchanges suggested they had little idea of the Taliban's strength. Electricity and water would either be absent or hard to come by. Danfung with all this knowledge is set on going.  Beadie's pensive look and sharp intake of breath could be an acknowledgement to "this conversation".

Just before boarding the Chinook Danfung's tells us his camera button jams. His inner voice poses the question, what is the point of me going, if I can't shoot anything. Weaker minds would have capitulated.

However the malfunctioning button is resolved by the same ingenuity and tenacity that's become Danfung's trademark in either his camera set-up, the rig, or Condition One - the new immersive viewing screen he's pioneering. This time it was his finger nail digging out the dirt to set him back in course.

Inside the Kill Zone
There is a scene in one of my most absorbing war movies: We Were Soldiers (2002), starring Mel Gibson as Lt. Col Hal Moore in which a young photojournalist Joe Galloway boards a chopper to the LZ zone - the kill zone.

The soldiers have been been stirred by their Colonel. All of you will be coming back, but not all of you alive. Joe Galloway played by Barry Pepper witnesses a deeply horrific mind-numbing assault on the unit by the People's Army of Vietnam.

The morning after, pool photographers and TV camera crew are flown into a sanitised kill zone. As a gaggle, they search for motifs to relay this bloody battle and then come across Galloway.

That conversation now!  Galloway has become the story doing something the rest of his colleagues could either not do or would prefer not to. Forty six years on, Danfung has become Galloway.

When the audience applauds, I find myself doing so not just because of his film which is shot with the hand of Malick, the eye of Lelouch and coruscating brutality of Lu Chuan (City of Death 2011), but that he also had the kwai to tread into the unknown - the kill zone.

That is the conversation. Invariably it's one FOCs (Foreign Correspondents) talk about when the beers are flowing, when they might also light-heartily joke about near-misses. It's all about trust, says Danfung in relation to the unit he was with, which was reciprocated by Sergeant Nathan Harris et al - who would become his main character.

Self belief and trust can be endemically unwavering. In 2002 when I was assigned to be Lennox Lewis' videojournalist, I entered camp with a a hint of doubt. What if Tyson actually won. I was chastened not to think that away. Two weeks in camp I was a convert. There was no way I now thought Lennox was every going to lose his heavy-weight crown to this bruiser.

The Art of War
At the Southbank Centre, where I am an Artist in Residence, last year about this time I'm spell bound by a clip online called Battle For Hearts and Mind*, later changed to Hell and Back Again. I email the photojournalist and he promptly replies.


For two and a bit hours given the bent of my research  my questions to Danfung have a specific line of enquiry. His answers are illuminating and in my guise as artist, journalist and academic, I'm continually digging and documenting precious responses.

Then Charlotte Cook, one of the most erudite, social media practitioners I know, who is part of that august outfit, the Front Line Club emails to request whether I wouldn't mind being part of Sheffield Doc Fests debate on Cinema Journalism.

She's looking to Danfung as one of the panelist. She's hardly finished the sentence and needs no convincing before I nonetheless weigh in: "You gotta get Danfung, You gota get Danfung".


The Cinematic discussion
Restrepo (2010), by the the brilliant Tim Hetherington, whose life was cut dramatically short showed war as the new breed of photojournalists would realise it. The Bang Bang Club (Carter et al) painted South Africa behind the news headlines in 1990s. Yannis Kontos I have had the privilege of working, a World Press Photographer Award Winner and some 18 other international prizes, continually delivers on the immanence of the image.


PIXELS WITHOUT BORDERS from david dunkley gyimah on Vimeo.
Yannis Kontos Promo I produced for his 2006 World Photojournalism Award. For more go here

Yet, Danfung, many affirm, has done something quite different, so different.

Hell and Back Again and the small team that shaped it: Roast Beef Production Producers Mike Lerner and Martin Herring; the editor Fiona Otway whose Felliniesque intercut and parrallel editing weaves silk through the film. In addition, Sabotage films, Thought Engine and the Britdoc foundation are contributing to Gombrich's schema plus correction model for narrative-art film making.

The cinematography is lush, the characterisation indelible, its narrative reflexively beautiful, the finished product - a must see.

Academics, and I am one of them in film will reflect on the frenzy. We're not being priggish. In wars gone by (WWII) many photojournalists and cinematographers assigned to the US Army's photographic unit shot with small Bell and Howells.

In contemporary history, Vaughn Smith of the Front Line Club covered wars with his Hi-8 in the 1980s; Inigo Gilmore a one-man-band whose work I deeply respect, also a panelist has too covered conflicts; Veteran film maker Bill Gentile, now of Washington State who is pioneering Backpack journalism has the eye of Odin.

So what's changed? The reconstitution of cinematography and full-feature narrative (parrallel storytelling) designed for the cinematic space.

A profession whose technical and creative efficacy would traditionally have tapped many skills and which points to an uncompromising epistemology of non-fiction movie-making is problematic to emulate.

For Hollywood et al to approve of Hell and Back Again, as it did giving a nod to Restrepo is to acknowledge finally the world is no longer flat; civilisations of DSLR technology exists beyond the horizon and they're coming. Oh Yes they're £$££@@% coning. And they debunk the Fordisation structure for professional film making.  Woops!

Danfung, in his calm and collected way refers to it as Immersive film-making. Immersive for the viewer in its aestheticism, yet the embodiment of its filmmaker in hostile territory to get the story is overwhelmingly impressive. That conversation!

* thanks to Saeed Taji Farouky for pointing out

Coming Soon: What camera to use where and visual hallucinations on film 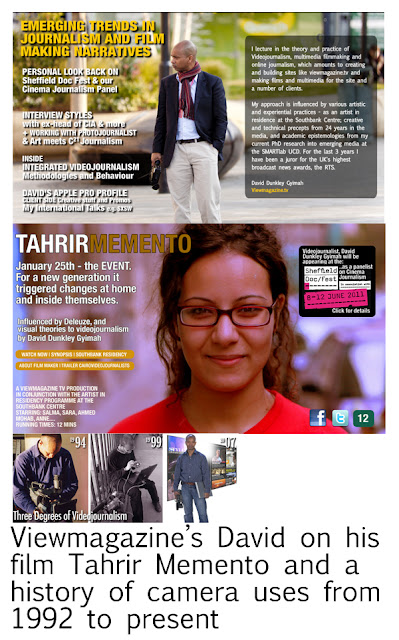 David Dunkley Gyimah was a contrributing panelists to Cinema Journalism at the Sheffield DocFest. He's been a journalist since 1987 freelancing for BBC, ABC News, and C4 and has covered conflicts. As a dedicated one man band videojournalist since 1994, he now teaches videojournalism and cinejournalism to clients such as the FT, PA, in  the UK and around the world. His film Tahrir Momento - about Cairos revolution was previewed at Sheffield. He is an Artist in Residence at the Southbank Centre and is completing his PhD in film and news. He publishes viewmagazine.tv.