Egypt's Uprising. I'm back in Cairo a couple of weeks on, but nerves are still raw. I have six hours after presenting at a conference for videojournalism and through my friends Salma and Ahmed, make this -  15 minute film.

This is my latest project; the trailer for Tahrir Memento was shown at the Sheffield Doc Fest recently in line with my interests about memory and consciousness - Bergsonian.

Though something you'll pick up on in the film is how Egypt's young are loathe to tell their parents they're involved in the revolution.

I am interested in beyond the news ( meta). I have been a journalist since 1987, starting with radio for four years with the BBC before Television again BBC, ABC News and ITV, . Then in 1994 I combined this with videojournalism and being an online journalist. In 1998 I worked for an Ad company and doc coms.

For me a segment of news making has not kept up with current philosophy - after post modernism.

When it captures an unfolding event of value news tends to come in to its own, however beyond that when the issues become complex, the propensity is too often to distill the narrative and construct to make simplistic the affairs - TV's Achilles from the 60s (Neil Postman).


Though self-filming is the norm now, I'm more keen on the creative directing of a story. That means everything from the filming, creating the posters using (photoshop), building the site using CSS and Flash for interactivity and SEO-driven write ups. In principle I don't have to do it all, but I understand the language to communicate intra-discipline.

As an Artist in Residence at the Southbank Centre that helps me conceptualise and see through projects; as a senior lecturer at the University of Westminster I pass on this knowledge. I shot this on a Canon 5D Mk II and there were aesthetic as much as practical reasons ( See Pics and last post: media methodologies).

Firstly, I'd been stopped previously by the secret police with my JVC cam and escaped any consequences by producing a letter ( I have kept) that gave me permission to film a 5 mile shooting radius.

With the stills camera, though it was inspected, I was left alone to take pictures, except I was shooting video. 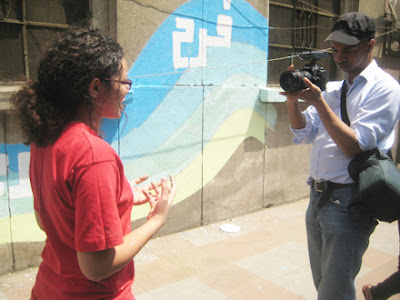 There is a further backdrop to this story. For the last three years I have been training young grads from Cairo and the American Uni to videojournalists iat the state broadcaster Nile TV. I have filmed rare footage working in their state broadcast complex and am looking to put on an exhibition of that work and the videojournalists work too. If you're interested do get in touch here.

Here too for post on Sheffield doc fest: why we'll be talking about Danfung Dennis for a long time Filming in War Zones.