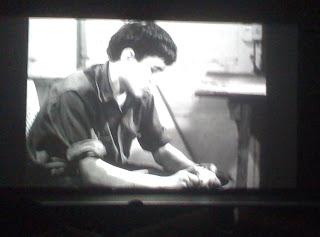 What is the point of contemporary history, whilst we all clutch our flip, phone and DSLR cameras?

To some it's quite obvious: how the past relates to the present. In that guise, one of yesterday's masterpiece movies carries the torch for why we must continue to live through past events.

At the library room, Sheffield doc fest, 17 people have gathered in a spacious empty auditorium to watch one of the finest films made.

Some of you may already be acquainted with Flaherty's finest hour and a bit after his overwhelming success with Nanook of the North.

The evidence from yesterday's spartan audience suggests we need to revise and understand how the past works the present.

Louisiana Story is a fictional drama from the father of documentary. It's a film which simplifies the story of oil drilling and its benefits through the arc of a young cajun boy, whom barefooted roams and swims through his wilderness with a pet racoon supposedly devoured by a crocodile.

It's flawed masterpiece. In recent years, I have come to hear how Flaherty fancied himself as a Hollywood director, but did't quite make the grades of the Fords or Stroheim.

There's nothing here I'm saying that hasn't already been said by a litany of film scholars and movie fans. But the significance of Flaherty's ouvre bears witnessing now, because of where we are in film documentary canon.

Yes its out of synch, the plot line thudders, the acting is terrible. But in its time it was writing rules that today we look at and guffaw. Its cinematography though is still mesmerizing is thanks mainly to a young cameraman at the helm who we found reason to pay tribute to a couple of months ago: the great Ricky Leacock (RIP).

On Saturday another figure from the early days of film technique, David Maysles takes to the stage to talk about his work. It's a real treat. If you're at the Sheffield doc fest, lets say hello.