Why Videojournalism is a haptic craft akin to gaming

There appears no conscious thought. It's as if the gamer and game are attached playing as one - best exemplified in the film "Gamer" where Simon (Logan Lerman) literally plays Kable through hand gestures.

Elsewhere in Malls with Wii and X-box displays kids can be observed (though we marvel no more- we did with Pacman) to be in tune with their console.

Their console has become a haptic device. Sensory touch and feel is as good as manipulating the game without a device, which is why Gamer offers a unique perspective.

At some stage of the gaming level, the gamer ceases to be intimidated by instructions and technical efficacy.

Crudely "it's about the game baby!". Cause and effect; anticipation and intuition, which incidentally Philosopher Henri Bergson in The Creative Mind calls a mode of reflection, far different from intellect, take over.

The similarities in Videojournalism could not be more stark. Where the camera remodels itself as haptic vision - what you see down the lens informs you in story mode form.

You switch screens and perspective from the real (external scene) to the virtual (lens) offering a different point of view.

The frame in itself cedes your birthright of objectifying scenes through a 180 degree plane; 40 degrees when you're focusing - how you normally see things.

Cause and effect often override the news cameras sense for data stasis.- except principally where the action is unfolding - what I call event-driven awareness - when the news camera follows the event.

Ordinarily the cameraman sets ups for the scene or limited scenes and holds.

The documentary maker liquefies the scene - asking what immediately comes next, and next, and next... The fictional film maker has preplanned, rendering his or her task no less complicated, for other reasons.

The experienced videojournalist does the same, with one exception, she or he is driven also by authorship via narration, as well as visualisation. It's as if you're playing two games inflicted as one: narration and visuals.

What's more they're attempting this in a shallow lapse of time. Turnaround mimics the game. Intuition and compressed refexivity play a larger role.

At a creative fight club it took us around 9 minutes to film, cut, and upload an interview which was 3 minutes. Here's one example from work in Macedonia with a senior BBC figure.


Results - How to create a multiple angle interview in 3 mins from david dunkley gyimah on Vimeo.
[ You can click here to see this was constructed here]

The TV industry of the 1990s understood fully the differing senses of visuals and narration enough to attempt to eviscerate videojournalism's ontology. It couldn't work and wouldn't work, because you could not possibly do sound and visuals at the same time.

We never referred them to Gamers, that through training and beyond the technical feat of mastery kinaesthesia was very possible.

Haptic and Cause and Effect though prescribe a narrow gate towards delineating videojournalism.

And if at this stage this rather sounds obscure, then through out the many posts on this blog I have failed to elucidate what I believe videojournalism is and more pertinent what it could be, which is shaping through post TV debates.

Videojournalism is not a bolt on, though it's had every attempt at being one to existing media, yet it emerges from the DV film maker et al with a caveat of filming substance of news value.

That word "news value" is a worthy signifier in an age when the Internet has shown ( we always knew it existed) the plurality of events constituting  news, your news, subjective news, was important.


Charlie Bit Me has tremendous value; his dad enacted a methodology of videojournalism. But before you discard this thought as a "what?". There was no construct involved; a combination of haphastance and the fondness of memories reveals the "moment"  - which is not replicable.

The "moment" which has come to equate a substantial portion of Youtube's form prefigures the alternative more complex form of the construct. That is where do you go next for build a narrative from the scene yet keep interest?  On the other side of the fence, the Gaming programmers figured this out -but that's for another post.

The question that should concern us looking to become proficient videojournalists is how we transcend the normal to the normative? Partially the answer lies in gaming culture. 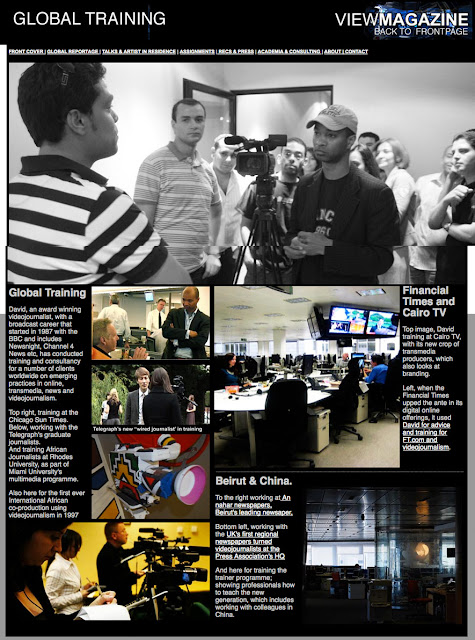 David Dunkley Gyimah is a practising videojournalist and senior university lecturer and trainer, and PhD candidate at the SMARTlab investigating future media. He has 23 years of media experience and has spoke widely around the world on videojournalism , online and future media. He publishes viewmagazine.tv, and is available for talks and commissions
Posted by Dr David Dunkley Gyimah at 9:06 am