Sixty Nine Days - the movie of the Chilean miners 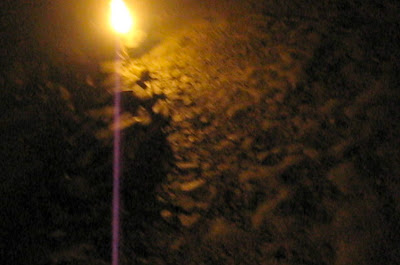 As films go this was truly epic - Sixty Nine Days.

A worldwide phenomenon played out on the small screen years earlier (that would be today) on live TV.

Thirty three miners, also a good a Hollywood title, though not with the same resonance as www.sixtyninedays-the-movie.com emerging from the depths of entombment,  delivered by awe-engineering cesarean.

As we wept, Hollywood moguls mixed their emotions. After all they too are human. But it would not have escaped them that here was a film to be made on par, if not more ambitious than Apollo 11, or The Titanic.

And like both  seafaring (really) tragedies, here was a movie whose outcome everyone knew, but had more than enough drama to sustain two hours.

So, with the dust barely shaken of their boots, Hollywood is now in a behind-the-scenes bidding war.

Which studio will emerge triumphant for the rights, which will no doubt have trans media written all over it: book rights, merchandise ( those dark shades) etc.

Which director will be tasked to helm this soon-to-be global brand?

Will it be an ensemble piece, that's 33 characters?  Or will it be character-driven to feature the perceived stars, such as Mario Sepulveda  (Super Mario) and of course the 19 year old, who'll attract the teen vote.

And then it could get messy; a story needs tensions and wrong doings. Cue miners' infidelity, wives and girl friends fighting for the attention of their man, and cynically you could say financial dues.

Movie Journalism
But here's where this story takes a u-turn, because in discussing a movie about one of the most epic factual stories of our times, this should be a narrative penned and produced by journalism.

If journalism bereft of a definitive pathway of the future, but willing to experiment, had it in itself, it would necessarily reclaim what was once within its stable.

The schism dates back to the early 1900s when Lumiere's and George Melies slugged it out for ownership of fact and fiction. The Lumiere's doubtful of their novel equipment failed to press ther case. Vision became at best documentary.

In the 50s as Television news took over from Newsreels,which dallianced quite wrongly with fictionalised narrative, it too baulked. Such was the clamour for truth, that anything but was derided - even the great Grierson - father of documentaries - and his staged reenactments.


And therein lies an intriguing issue.  It may be that television doesn't have the infra structure to produce and distribute cinema films. It may be that they don't have epic directors, though that's questionable.


But frankly, TV news doesn't do fiction.  And furthermore it won't discriminate between fiction - as in made up for commercial reasons, and fiction crystallising a story based around fact, but pushing fictional content. Docu-dramas are one facet of that. The motif "based on a true story", another.


However, last year the BBC showed its hand, with 10 days to War. A brilliantly conceived story of the run up to the Iraq War, in which I was one of eleven jurors at the prestigious Royal Television Society, which voted it to take the coveted Innovations in Journalism Award.

In next weeks Special viewmagazine, I'll be looking to bring you an interview with the BBC Editor who conceived this and the strategy which enabled him to posit the programmes into Newsnight.

It's a dangerous road to go down the editor admits, but if you're experienced enough -as the Newsnight team were the results can be highly rewarding.