cine-videojournalism - a lesson I learned

In the summer gone a short film I had made was screened on a cinema screen at the Southbank.

The film all of 5 minutes was over just as it had begun. The effect of which caused me some disappointment. Everything I had planned about the film, turned out to be anything but.

We hear so much about the cine adjunct to videojournalism surfacing courtesy of, in particular, the DLSR cameras that a growing debate about cine-journalism is an industry in itself.

My take and by no means as blunt as it seems, but that the lens culture of shallow depth spurned by any piece of equipment, does not in itself constitute cinema.

Moreover, if it were the case then how would we define deep focus as exercised in that cinematic feat of Citizen Kane. We could argue a cultural specificity as a get out clause.

Certainly there is no denying the allure to a visual stimuli whose aesthetic affect has been often associated with cinema praxis, but to assume equipment is the key primer ignores a huge epistemology of knowledge that makes cinema work, as well as the giants before us.

We could point to fundamental differences between the two forms cine and video, which in attempt to correct the former's elitism would bring forth videography to counter cinematography.

We could talk about movement to reinforce a narrative. There's no such thing as a cut away in cinema.

I could in fact have a 2 hour discussion about the many facets which markedly define the signified of cinema to that of other media.

In many ways the medium doth shape the message, but the journey towards a videojournalism within a cinematographic ecosystem pulls towards the philosophy of the moving image. Yet plays heavily also to a reassessed ideation of the still image in say photo essays.

Delueze's What is cinema is much food for thought. In practice, in commerce we want immediate answers, simplified discourses, clear lines of demarcation, but alas I believe it's far more diffused.

I may have spoken effusively about cine-videojournalism in recent posts and I believe we are inching away from video ( form and style within TV news) to the more dominant escalator in film.

But the technology and practice will not in itself provide clear answers; they lie in devising new languages ( literally too), not borrowed, but worked a new. In the field of experiments where mistakes that are made inform our own and others phenomenological outlook.

For me - a huge lesson - they lie in thinking, however beautiful the image produced for the mac, has a different haacceity  which when impinged on our conscious yields something or not that comes to define cine-videojournalism. 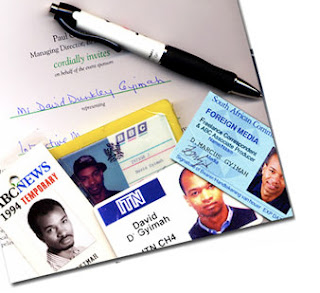 I have been making films for 20 years of a 23 year media career starting with the BBC with BBC Newsnight, BBC Reportage, ABC South Africa, WTN  and Channel 4 News, and Jon Station Agency ( fmr head of TV at Saatchi and Saatchi etc.

In the last 10 years I have been a senior lecturer in videojournalism at the University of Westminster - the past two years of which include a PhD study into the Outernet.

In 1994 after becoming a dedicated videojournalist working at Channel One I shot on a range of cameras from beta, 16mm, and digi beta. This one above is from a shoot in South Africa for Channel 4 News - which you can find here.

The blog above is not an epiphany, and depending on your entry into this blog, you will have read going back to 1995 aspects of cine and interactive videojournalism.

However, this post was a realisation of the intention of 17/ 23 + inch mac screens transmogrificating into the precept of the Outernet ( see front page images of viewmagazine.tv  ).

I have been writing about film, innovative video, videojournalism and cinema since the mid 90s. Here's a piece from Blue Print in 1991  highly respected architecture and innovation magazine .

The film fortunately was appreciated by the audience who saw the group before seeing the short film. But as a film maker seeing it on a cinescope screen ie an Ourernet system, I would have changed one main parameter to correct the film's metronome. In less than 10 years time this will be a moot point.

P.S If you strongly want to understand the epistemology of cinema in the context of cinema, and journalism then you would do well to read Gilles Deleuzes What is Cinema 1 and Cinema 2. There are few people alive today who make the case for cinema and  its imbrication with other forms. A MUST READ.


Posted by Dr David Dunkley Gyimah at 9:40 am