Videojournalism sooner was never the paradigm 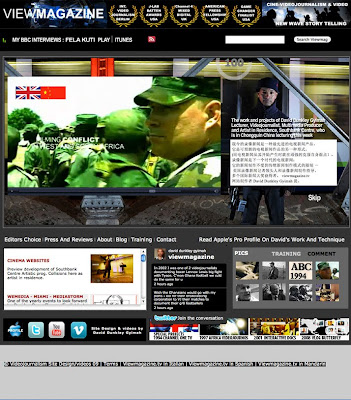 If the good people in broadcasting were not so dismissal and protective with video and TV skills we would have realised, just as amateur photographers and film makers that this video thing is not rocket science.

Yes, it involves a number of rules, some made up to thwart vague interest, but it is just like riding a bike.

The revolution we see or will realise is how 5 years on, every kid who learns to write with be taught visual language to communicate in video.

And if they don't, they'll learn it themselves.

But here's my plea, don't stop at video, look to design. I have argued many times in previous blogs that the direction of video is of a cinema and design aesthetic.

Lev Manovic said something in his popular book, which I circled in 1998. That soon spatial video will take its place - a reworked version of the zoetrope and that linear narrative may be given a run for its money.

That's happening, and with video hyperlinking, a radical gamechanger awaits.

I'm looking to a new design of my site to reflect the direction my own path has taken.


There's a lot to videojournalism than meets the eye, and design I believe will feature heavily as a skill set to bolster existing related knowledge.
Posted by Dr David Dunkley Gyimah at 12:08 pm