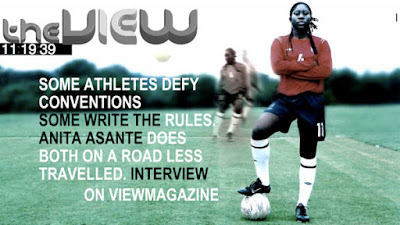 England's woman team often demonstrate how the men's squad should perform
To be an English fan of its national football squad at the moment, is the nearest thing to self-harm.

Nay being in a mad institution of the 11th century is more like it. But, and this is a big but, there are indelible life stories to be learned. Indeed a positive spin on humiliating news.

1. Thinking above ones station.
England weren't just bad, but the belief was their poor performance was an aberration.

We've come to think like greedy bankers that it's our right to be better than everyone else, without a degree of humility, and inward examination of how we solve our problem.

More often than not money is thrown at it, and that wrongly we think is our panacea.

2. Putting faith in institutions.
We the people are run by institutions, footballing and sport are just a few.

Men in suits who decide how you the fan responds. They're unaccountable, elected by the few, interested in power.

The media's wake up call to the digital revolution is much needed in the world of sports. If the fans boycotted in protest for a day to show "we-the-fan-power", the balance of power could be shifted.

We saw glimpses of it in after Rooney's outburst and the FA forcing him to apologise to fans.

3. The individual above the self.
England, where overwhelmingly criticised for not playing as a team.

In moments revealed on replays Lampard and Terry can be seen walking to a situation that demanded urgency. But why blame the team?

Successive political governments have fostered the notion of individualism. You are good, which is why I need you, rather than you're hungry to help the team.

The former ethos is bankrupt and any root and branch change to England and our own psyche has to reward collective wisdom.

Call Germany a young side, but like the USA they play for each other. Our squad will be back to reaping the spoils of their labour in two months time, and we'll welcome their efforts with exuberance

4. Creativity and the technician
Our ability to be creative is fuelled by attributes that court risque and failure, and whether its our national squad or workplace we refuse to engage in this.

Our media won't accept losses from our national team or our politicians endeavors to try new things.

To that end successive governments would only be brave enough to bring us "good news", while the small print deviously hid how they were robbing our back pockets.

We then sacrifice creativity for technical.

Everyone notes the Premiere league is one of the best in the world, some bravely call it the best, but is that in terms of creativity or technical?

For creativity give me Serie A - Italian league or Brazilian League. Yes we need to technically adept but it means nothing if you can't creatively apply that knowledge.

5. Truth and Honesty
Until we're honest about our own flaws, we'll never be able to find a meaningful solution.

Pride, perhaps arrogance, perhaps even genius, but we see this time and time again in our own institutions, particularly the media.

And as the digital dawn has shown to the media, those who deny change, will atrophy
Posted by Dr David Dunkley Gyimah at 9:24 pm