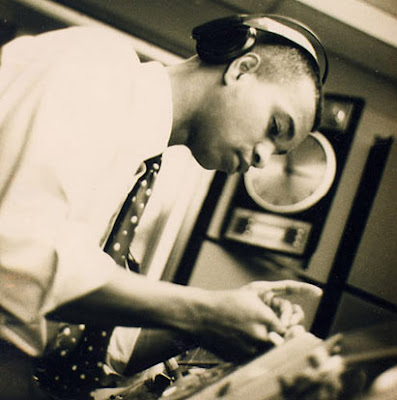 David working at BBC local radio circa 1988 as a freelancer
The transition from undergrad to Masters programmes, or for that matter trainee journalists to the long-in-tooth, can be a difficult one.

My own experience offers a story I look to for answers.

In 1987 nearing my graduation, I had joined the BBC as a freelancer. I was getting on well, but then the dynamics in the newsroom changed with the arrival of a new member of staff - also a student.

Things started to go wrong and because of a combination of my impetuousness and hurt at being sidelined, I shut up shop. I stored all that was wrong for an interview for the one staff job coming up.

At the interview things were going swimmingly, but then I was asked: "So what do you think about your team members and editor?"

I criticised them in a manner which I felt fit, offering no self-critique in its place or deference to understanding the process.

The interviewer from Human Resources asked me two questions:


There and then I knew I'd lost the job. Today I have a theory, which stems from my experience as a student undergrad and the way we are taught and in deeper studies such as a PhD, when you set your own study prog.

Changing journalism
As journalists or would-be-journalists we are blessed with an asset that should, I say should, aid our inter-relations with others; the use of words and methods of communications.

But we are individuals who exercise levels of me-ism that at times corrode our relationships when it shouldn't be so.

I'm certain I wouldn't hire me, if I knew when things were going south, I could not find a means to enquire and help in some way bring attention to how we could look for a solution.

The training of journalists is one that often overlooks life's teachings. But that's not unusual.

In parallel scenes in the aviation industry, it took a wholesale change in attitude to eradicate a huge problem.

The cockpit of the 70s would brook no challenge or advice from the first officer to the pilot. The pilot was the single arbiter whose authority could not be challenged, resulting in a number of crashes that could have been avoided.

So the airline industry fostered a new relationship between its flying staff.

When the web advocated sharing ideas with Linux charging with the flag, it was so anathema that trad media either poo pooed it or tried to kill it.

On the web we don't mind, or perhaps pretend we're selfless. And we've learned to create a nomenclature of how to address problems e.g. don't feed the troll, but in person we still clutch on to antiquated, yet, yes humanistic ideals.

Learning from our mistakes

Davis speaking about creative, technical and semiotics of creativity at Apple Store.

It's possible, and now I'm a little wiser, that we all need to go through this me-ism path, because only after that can we evaluate our own standings and learn about ourselves.

Mine cost me a job, but I believe it made me a better person. It took many things including Stephen Covey's lesson on interdependency - which I read by the way in a book.

For those that know me, I hope I strive to be fair and where things are seen to be off target from my own ideals, I find the means and ways of talking about it.

Many times I have discovered it's unintentional, that I am as much the solution as the scene I look to. It takes two people to have a conversation.

But if 21st journalism is to build on its antecedents, the underlying "real life" attitudes within social networks e.g. respect for oneself and others needs looking at and translated into the lecture rooms and journalism shop floors.

Can we teach it?

We can create artificial environments to test these: group work dynamics, shared problem solving, the wisdom of crowds approach, but ultimately the answers lie within ourselves.

And that may be a matter of you mastering your programme, as much as anything else.
Posted by Dr David Dunkley Gyimah at 7:49 am