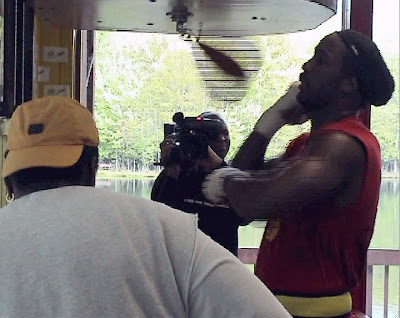 The explosion in videojournalism and equipment is one of the most exciting features 0f the last five years.

Some of you may know my work in using small DV cams and even though this has allowed for a range of video projects, there is still something to be said about using pro cameras.

I appreciate this may be out of reach on your pocket, but I wanted to take this opportunity to talk about my background and how as a videojournalist using pro cameras has been significant in my understanding of cinematography in broadcasting and filmmaking.

The top shot is from 2002 when I was hired by World Heavyweight boxing champion Lennox Lewis to shoot his fight: Lennox Lewis Vs. Tyson, one of the most anticipated fights of the decade.

Here I am at base camp in the Poconno Mountains, before setting off to Memphis at the Pryamid Arena to to cover the fight.

Now what's significant about the use of a camera like this is that journalists learning video journalism would rarely work with a pro camera, which had a larger range of ND filters and other accessories to improve the picture quality.

Many journalists were more likely to start their careers with DV cams. 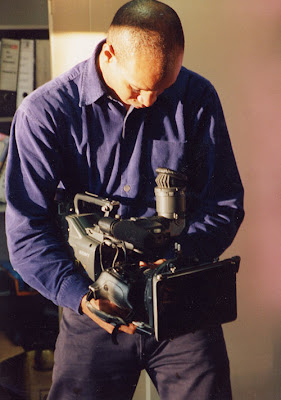 This is one of my favourite cameras - the Digi beta 970P It's top of the range and cost then about £50,000. I uses this on several shoots but all always hired them.

Here I am shooting a feature for Channel 4 News in South Africa in 1999.

These are some of its features:
You'll notice it has a Matte box at the front of the lens which allowed me to use different filters.

I think that is a hugely important point, because I am altering the look of what I'm recording at source. If you've ever graded your films you'll know what I mean.

Using different filters allowed me to imprint a colour-code to the image I perceived.

In one of the shots that I'm hoping to find and post I've altered between deep red filters and harsh colours in trouble spots in the townships - all through filters. 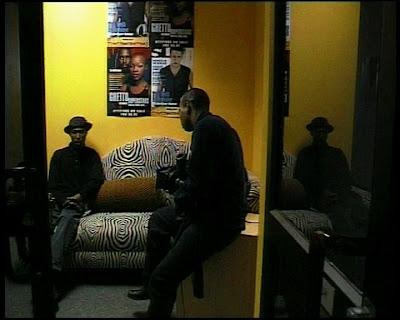 Here, you can just about see the camera on my left. 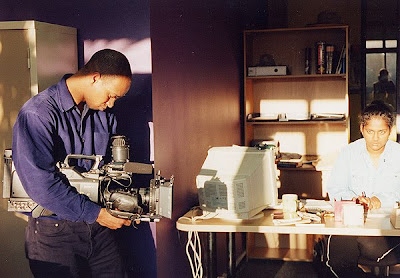 This shot really illustrates the structure of the camera. 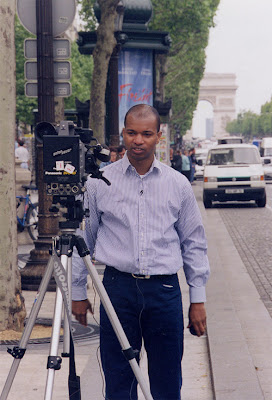 And finally another shot as a videojournalist using a Panasonic in Paris - the aftermath of the Death of Princess Di, 1997 reporting from France, Champs Elysee.

I remeber this shoot well. I got some pretty strange stairs doing a stand-up by myself in the middle of a busy shopping lane.

Now why is this in some way interesting? It's interesting because of the difference between DV cams, pro cams and the new brill kid on the block the Canon 5D II.

I think something really interesting is happening here in the videojournalists firmament, in who comes from a journalism background and those that come from a picture background.

It' not so clear cut because there will be always be overlaps but I think you'll find that
a lot of photographers looking to video are opting for the Canon, while pro journalists are gravitating towards the camcorders.

I don't use a Canon 5D Mk II just yet, as so far my body muscle memory still likes the phantom hold for the Camcorder. It's a matter of ergonomics: the way its held, its feel and the assets I get from the camera.

One of the my training partners at the Press Association who has one says it's more geared towards the doc because of difficulties in pulling focus.

That's an issue whose pros have been sold to outweigh the cons. You try filming on the fly with a 50mm lens at 1.2 - great shallow depths but difficult to control on the fly, unless you push your f-stop higher and shoot deep-focus, but even then.

Hollywood had an answer for these, the focus puller.

A couple of years back a Sony exec was adamant that the small cameras would never feature interchangeable lens. I'll post that vid as well when I locate it.

Well, my guess though is that there's a real fight erupting behind the scenes and it will only be a matter of time before the small DVcams make way for lens changes.

Otherwise video cameras may well lose the intiative in much the same way Hoover did to the Dyson.

And that will be exciting. At the moment I work with an adaptor on my JVC GY100 with a prime lens, which gives me OK enough quality, (though better than the vx1000) but no where near the same picture size as the pro cameras I used.

That said if you are a videojournalist, I'm pretty much camera agnostic. But if you can, I do recommend getting your hands on a pro camera and getting the feel and sense of what it does, which will let you appreciate more where you are with the small accessible gear.