Presidential Videojournalism- Don't throw the baby out with bathwater

Presidential Videojournalist. President Obama shows his shooting skills, but is he shooting stills or video? Picture WhiteHouse, Pete Souza See here for David's 100 Day Obama video played at the Southbank Centre to an original live score by composer Shirley Thompsom
You're a would-be videojournalist. You're researching a course and you're at a loss at You're now in possession of the most amazing piece of shooting kit - a stills camera that shoots film and you have a bit more time on your hands than the US president. So options? When you open the directory for videojournalism outfits, there's the university and as many short course videojournalism training outfits leaving you a trite bewildered. They offer different epistemologies as those who have done short courses and proceeded to Unis or vice versa will testify. Not least the length of study. Consider this, a thought I'd like to stake in this piece, a sort of iambic pentameter. "Da de dam du dum, dum. Don't throw the baby out with the bath water".

"online video part of 'the new journalism'? - original article 2005 on journalism.co.uk by Jemima Kiss. Here for the rest There are now two schools of journalism. In one, the journalist must be accredited and trained. In the new school, we have bloggers, mobloggers and latter-day gonzo. You can attract a large international audience through blogging or podcasting, so a generation of storytellers may well bypass traditional routes of education and the mainstream if they don't feel the industry is relevant to them any more. "

Television is your answer 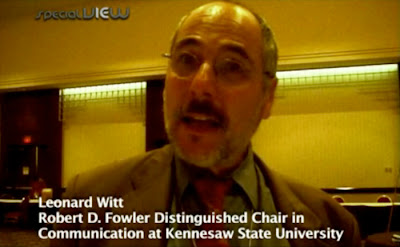 Professor Leonard Witt, talking about Trust in the media from his 2005 Conference in San Antonio. You can see the film I made on this on their site. Trust is an issue I'll come back to later. Many of us may chasten television, I did and ocassionally still do, for the manner in which it tells stories. But this semiotic exists for a reason. Its use dependent on its medium. There are horses for courses. It's not the art of television journalism that is at fault as you pursue your new love. There are the most brilliant TV practitioners that ply their trade or have left extraordinary legacies for us to be informed e.g. Murrow, Jennings ( I met as an ABC news producer in 1994 in South Africa and was just awe struck), Bradley, & Wheeler, It is its application by those no longer turned on by its creativity and the extraordinary association and connectivity with the audience that has reason to make you feel frustrated. How many times as a journalism students have you screamed at the television reporter proclaiming you could do better, because a pun was not necessary or the reporter dominates disproportionately the message of the report.. But don't throw the baby out with the bathwater. Da de dum, da de dum Television journalism was and is a necessary lingua franca and just as Latin begot common parlance e.g. Catalan English, French, Italian, so will generations ahead proficient in a paradigmal shift in visual factual literary story telling, be thankful to this form. Which begs the question for you right now. You've decided to go on a short course. It's cheaper and provides a quick rush to build your confidence. What do you look for in the background of the trainers? 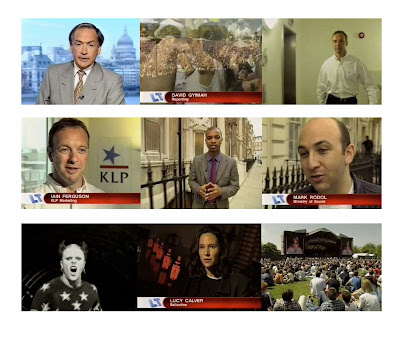 A still David reporting for ITV's "London Tonight", circa 1998, from David's book and PhD study in which using phenomenology he shows how his background working for the likes of Newsnight, Channel 4 News, dotcom new media companies, Designer, Commercial Promo maker has informed his notion of visual grammar.

Television, yes, to impart to you an understanding of the foundations, but then something else, hopefully, an illustrative vision on how to push the form. In learning about about composition today we still go back to the origin e.g. Caravagio et al. Yet to break the rules, you need to understand them and many of the rules, we call "rules" are in fact guidelines, there to be broken by the innovator e.g. 180 degree. Mind you my thinking comes with a footnote. In years to come again when we've turned over, we'll likely not teach television in videojournalism, just as you don't teach radio writing for TV journalism. Or or taking form for for, you would not teach creative storytelling in novel form for print journalism So back to Videojo how do you know your trainers will be able to place you in this new space? Be wary of abject recommendations. I spoke about this presenting at the World Newspaper Forum, last year. I once knew someone who approached scores of people for that cred letter. He eventually found one, and guess what pride of place it went. Front page. A caveat though, as in any profession, there are some people who are autodiadactists or combine conventional education with a penchant to keep rethinking. I can think of a few like this, but would not want to embarrass just yet. They possess that "kwa" to push you beyond the boundaries of your comfort, which is what you need. "Don't throw the baby out with the bath water. dada de dum da de" Teaching is a selfless act to others and a mirror reflection of ones self. That's contestable you might think as you're paying for the time to be taught, but the philosophy of teaching is not simply saying, this is a good film and this is how to carry a camera, but a psychological process leading to critical thinking and analysis, that enable you to be able to make your own judgement. 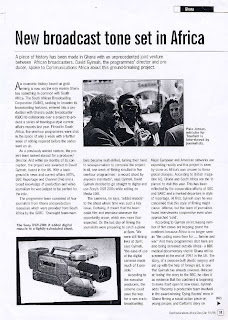 Why is a chair, this chair beautiful to look at and how can what I know about this chair be transferred to how I might build my website? The answers lay within us all. The frame work is what teaching, building on knowledge, imbibing different socio-cultural indexes and pedagogical explorations, is all about. Whatever videojournalism is, and I have my own convictions littered through out the history of this blog and articles I have been writing or contributing to since 1994, it transcends all that which came before it. It has to in many ways otherwise is fraudulent of packaging itself as the new new thing. Pic. David reporting from Africa on its first cross production between two African states using videojournalism: Ghana and South Africa ( 1997) David is in Slovenia, Cairo and Chonquin in the coming months lecturing in "training the trainers" for professional TV execs and University Professors
Posted by Dr David Dunkley Gyimah at 8:08 am