The Virtual Revolution - how the world turned on its axis 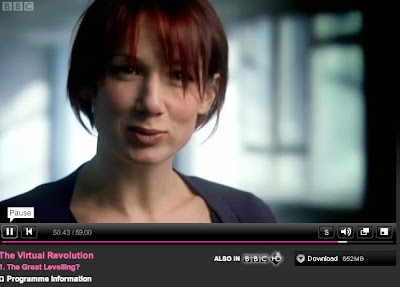 Its rich in information, well produced in that Griersonian direct cinema way - lots of heavily directed frames - and allows a professional to tell the story her way, without the male machismo that usually accompanies web ecologies.

No doubt it'll have a heavy rotation. Dr Aleks has been talking about the web since 1999 and it shows in her solid performance and confidence.

That said the BBC should have had her more conversational and asking questions on screen. Arianna Huffington's sound bite from a link jars into the next segue, but that's more a point for the BBC production approach to doc making. (Hope she found it a pleasant experience)

Anyways it's a traditionally polished product and will sell worldwide.

In many cases when you watch a landmark series like this, it's often what's left out than what's in that catches your eye. There's an extra poignancy if you've lived through the era casting a rigorous eye on matters.

I remember the phases all too well.

But enough of me though preening. Virtual Revolution features the big names: the father of the Internet, Tim Berners Lee and the unofficial father Al Gore sharing screen time with Gates, Wales, Zucker et al; it is a who's who of the web and frankly long over due.

And Good Gosh, a big budget to boot, flying out to Africa, San Fransisco, New Mexico, UK and in the future probably no continent will not go untouched. Wasn't the net supposed to make skyping shirk the air miles?

What the web did

What emerges from this first prog is a Tele visual version of A Brief History Of The Future - by John Naughton. A superb book by the way and a must read.

The message in the film is one of radicalisation which is being tamed. The corporates have caught on and instilled a new pyramid.

The non hierarchy meant to subvert has been brought to or veering to that big heel.

And it struck me with a touch of irony how news and video is being squeezed through a transitional pipe. Videojournalism which we practiced is now common place; the networks understand its value, though I would say have amortised it to fall in place with their semiotic.

We've had a technological revolution, but not a semiotic one and whilst technology is often the enabler, it still requires thinkers to try and plant new goal posts.

Because while we all talk new web standards and videojournalism it's still the traditional outfits e.g. BBC who can pull the assets together to make something as grand as Virtual Revolution.

It needn't be so. We're not being too naive. While there are a kerzillion video blogs we're still undergoing a small imperceptible shift to overseeing the new constructs.

Constructs that bring the same dynamism that the web wrought and still yields. Constructs that work on a form in line with a new aesthetic. That give to the trajectory of film making as blogs have done for the written word.

The emotional styled decade - someone called it. Ah, but the constraints of linear time. The Virtual Revolution continues.

P.S BBC please try not starting off a series with the Griersonian "Africa...." . There's a touch of the slight about it. You wouldn't start of saying "Europe... where the UK is". If you wanted to say Ghana, you could simply turn the script around. But like I said, it has international sales all over it.