The Art of My Praxis - Video journalism film making 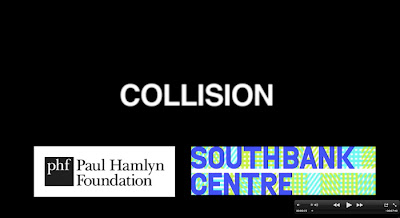 Jude Kelly asked the question: "what does this mean for you then?"

I explained, citing the intervention of Mark Cousin, one of the UK's leading film historians and an acclaimed film and documentary maker. Mark's recent piece, The First Film he describes as magical-realist is a road videojournalism can tread.

He and I had exchanged ideas; actually I had sought more from him, than him me in the days we had together under the banner of "Collision".

Collision devised by Jude, the artistic director of the SouthBank Centre, with Jeremy Deller, an artist in residence and turner prize winner, has been a space for artists and their invited guests to collaborate.

Back to the question. I explained some more. 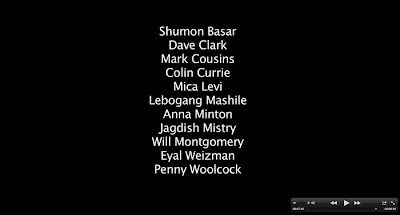 Then the pieces begun to reconfigure. That's not to say I hadn't thought about this. Indeed I have made no secret about the fact that a practice like videojournalism is unequivocally and unapologetically subjective.

I have also been looking to study its form unwittingly through the arts and artistic field of expression including Phd research.

Here Jude laid out the "self". In essence, as I reflected the art mode or fresh cinematic paradigm may constitute a new form, but it cannot and should not be divorced from the self.

This isn't the same as default subjectivity; the pretense of trying to be objective when frankly you can't. It's more a celebration of, for want of a better example, Jacques Ranciere's Politics of Aesthetic - on my reading list.

My thanks here are due to Eyal Weizman.Thank you. 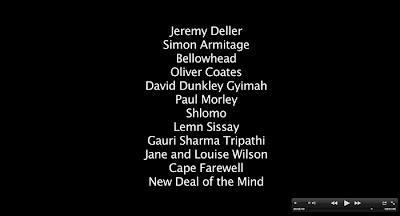 Explained to me over supper - an expanding space that constitutes the audible and the seen. Here in lies the aesthetic. This is Ranciere, politics is not the physical warring conflicting faction we see in the papers, but something else tangible.

It is the line between the haves and havenots, that which affects you and that which does not.
It applies across the boundaries in my case of artistic videojournalism.

What can I bring from the outside into what I might call Ranciere's space? This really isn't mumbo jumbo. It's about tapping into one's own experience in a performative and interpretive manner.

We've been here before through the work of Chris Marker. Poets do it all the while. Writers wrap themselves around their own words. Musicians are their own song. Remove the artist and the song is an imitated cover version. 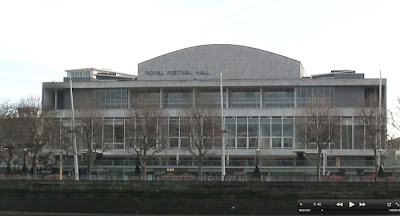 Videojournalism's authorship is thus both me unashamedly, and you as a practitioner. It's richer by our own experiences within a linked context to the stories we tell.

Does that mean in the absence of having never committed a crime you're a poorer narrator in talking about crime? Does the mean if you've never been to Haiti, you can't talk knowledgeably about a tragedy without the construct of parachute journalism?

These are questions [not specifically these ones] to be debated, which I invited further talk at City University in this video recorded by the BBC Journalism College.

The artistry in videojournalism would suggest metaphorically or physically finding windows into issues from within ourselves. Then the semiotic structure mined from any one of the reworked visual languages e.g. direct cinema, cinema verite, plays its hand.

A couple of days back Camila Batmanghelidjh from Kids Company said what we, a nation needs now is a shift towards an emotional economy. The context was within the neglect of care of our young.

It's big news again within two boys assaulting others. We blame the damaged children she said unawares or blithely ignoring the sources of their troubles. All sorts of other questions now emerge.

It must be time to shed the "removed body" from which we hide behind in solo video reportage. Naturally not all may agree for its conceived as potentially sullying the actual subject matter.

The artistic practice is understanding the dynamics of personalisation and what's perceived as inteference. In many ways that comes from experience, but traversed creatively allows for a narrative akin to a painter, a digital one, at work.

And the painter should know all about narrative, emotion and the self.

In the weeks to come I hope to talk some more about this.
Posted by Dr David Dunkley Gyimah at 10:53 pm