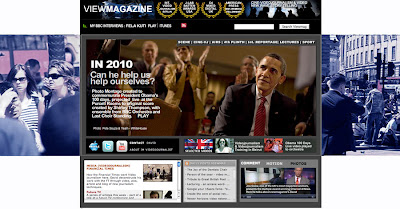 A more considered post, but a brain dump as I skirt around the playground of content, redesigning viewmagazine.tv to show body of work, journalism and videojournalism.

In 2010 can he (President Obama) help us to help ourselves? The montage on viewmag

2009 saw many more international outfits become vanguard and repositories for others to express the form.

It has become many things for many people; a diffusion of indexality.

Essentially, what is it? And does that matter?

But borrowing the last comments from cultural commentator Paul Morley on Newsnight Review, next year will likely see room for greater interrogation and expertise of the form and interpretivism.

The "experts" will by default have to explain their ground; either in the brilliance of their work, don't talk, act. Or through reinvigorated arguments which increasingly will have to work across genres.

This is not new, but the ambiguities of 2009 and before will need closure, just as we search for new ideas, as marketeers and sociologist convince us of a new dawn in 2010.

Graphic journalist Joe Sacco's Footnotes on Gaza, Newsnight - is one such example, which reminds me of Rob Chiu's Black Day to Freedom, little discussed in comparison articulating oppression and war.

Rose tinted eyes
It's dangerous to look into the past, because it has no limits, but when Janet Street Porter claims the 80s, 90s TV were memorable for the experimental programmes she made, she has a point.

And before I sign off offering yuletide pleasantries, a bit of mischief digging out this clip of Strictly Come Dancing's supremo 2009, Chris Hollins.


You probably didn't know this, but he started his career as a videojournalist on Channel One TV. This was his first stab at presenting Sports News.

A Safe and prosperous Christmas.
Posted by Dr David Dunkley Gyimah at 9:06 pm