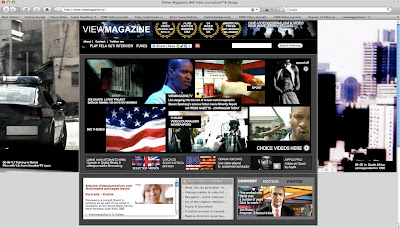 It started off as a hobby, demonstrating what could be done, but then most of that's now easily doable, so it boils down to the content and aesthetic.

The aesthetic embraces many themes, so if you're curious about solo programme making, how radio reportage is a central plank to good pods, how programmes can leave the online environment to occupy other spaces, then you might find the odd easter egg inside viewmagazine.tv

If anything it says it can be done, that me, you can take an idea, any idea (video, online, interactive, mobile) and turn it around: whole series, music videos, hard politics, interviews with the likes of the CIA, film premiers on the red carpet, travelogues to Egypt, Greece, and Beirut videojournalism training.

This September I'm looking forward to being part of the Knight Batten team training in South Africa, but not before some training in Spain and finishing off videos in the Future of broadcast.

And there's the projects taking shape, and the new deals in sharing ideas and experimenting further with the form.

If you're whizzing around online and you can stop over at viewmagazine.tv for a coffee, and then lets talk shop later.

C U
Posted by Dr David Dunkley Gyimah at 9:41 pm