News: the net generation - more digital knowledge is akin to hyper-hydration if you have not given yourself some room to acclimatise. Teachers, lecturers, trainers and speakers will know instinctively what I'm talking about. 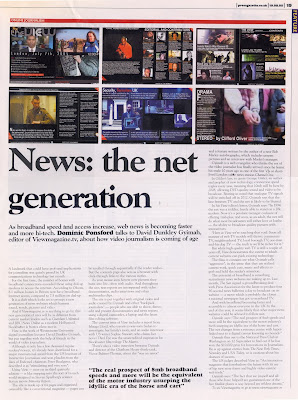 first published in the UK's Press Gazette in 2005. News the net generation. Click to enlarge to read

And so the scene was set as the young apprentice faced Knowledge at the summit of that long and arduous climb.

"Please Knowledge can I have some more?", the apprentice requested.

"And what", Knowledge asked, "do you intend to do with this new knowledge?"

"Seek some more", the young apprentice intoned. "many others are outwitting me".

"Come to the edge" Knowledge said. "Come to this edge".

And then the apprentice flew.

"When you have exhausted your existing knowledge and tested its flaws, climb the summit again. I will be here, where you may acquire new knowledge and appreciate its currency", was what the apprentice could hear in the distance.


Time to learn
For all the net's fantastic qualities, its Achilles is the notion of immediate gratification, that it must be so, here and now.

We live in such a truncated, metro-data driven, restless society, that the fix we require from knowledge has become so intense, we've forgotten how to gestate, to frankly, chill.

We have forgotten how to let those ideas brew, simmer, produce new nodes and richer thoughts.

After a while, that conference you're going to: different setting, different people maybe, but the message broadly will be the same. If anything the conference-fest is differentiated by the nuances of the personalities.

After a while as we've discovered even the bankers go bankrupt. Prompted by the Her Majesty the Queen's question: why didn't the bankers see the crash, they apologised in so many words claiming they just didn't

In rare cases, the collision of experts, location and juxtaposition of ideas yields genuine discourse as in this video here from SXSW featuring Clay Shirkey and Henry Jenkins Convergence Culture. And where I humbly had 50 minutes to develop my ideas of multimedia videojournalism.

But alas the blog you write can no longer be sustained as a repository of new ideas, if you fail to replenish your own. You may succeed on the surface, but might you think you're now processing, regurgitating tired slips of others ideas?

The new multimedia journalist is one such debate. 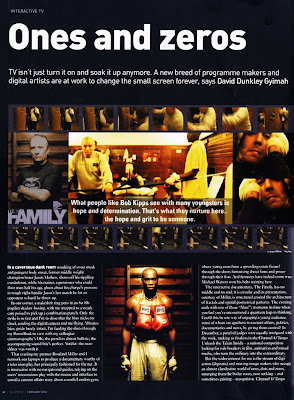 The new multimedia journalist - Blue Print magazine - a well known architectural and design mag, where David Dunkley Gyimah wrote about the new digital multimediast in 2001.
Please can I have...
My niece asked for a glass of water. She's three. She did not say please, so her mother requested she ask again.

"David, please can I have a glass of water, quickly!"

At age three she's already learned to seek out her wants "quicker". Okay it's an amusing illustration, but is sums up a state of where we are and where we're likely wanting to be.

Until four years before he came to London, Tamal, now one of Al Jazeera's most dynamic reporters, did not know what videojournalism was. He was a fast learner and today broadcasts out of Gaza to millions of fans, rightly; I'm one of them.

He may not have had the "knowledge" when he came to the Uni, but truthfully, Tamer already had step-in knowledge -which he tested over a year as a postgrad. He had already been a producer and fixer for the BBC. The leap was not so big.

Step-in knowledge is the next step towards your goal, separated only by one or a couple of other steps, as opposed to a whole flight. As Jude Kelly OBE, one of the UK's most respected thinkers in society and the arts says in this video, to get to where you want, it's easier if they're small steps.


Experience and Knowledge
What's my point in all this. That the knowledge you require needs time to be road-tested, to find, as a former Applied Chemistry grad, what we would call "Aha".

Those "Aha' moments stem from getting those small steps right and often taking the odd cataclysmically wrong.

I hope some of my former International students won't mind me saying; some may even be cursing me, but after acquiring that new knowledge and literally and metaphorically been pushed to the edge, its time to fly - and they do.

It's time to test where you are in your own sphere of influence and knowledge - the one where you can affect change, without seeking more new knowledge; ideas yes, but better comprehension. Give yourself some time.

We can still be a Jack of all trades and master of them all, but experience now should be your next teacher. Experience craves time. It is the reason why knowledge (you) may often pay deference to Experience ( your tutor).

Your tutor isn't that bound inside the walls of a university; but is that blog, kiosk, or wise counsel you visit. And experience is unrelated to age, but length of time.

Lewis Hamilton, at 23 years of age, became Formula One's youngest world champion last year, but he'd been driving since he was eight.

Trouble with our system of education, is you'll find yourself post graduation - in your early 20s - before you'll take the media plunge. And as intense as any programme is, you need that innings behind you.

Mimetic Media
So the professor walking the corridors, may not have twitted before, but blogged on compuserve's platform and wrote wire copy and headlines at a news agency, so has an inkling of what's involved.

That producer, director with an understanding of story telling, and an appreciation working a camera to tell a stories, may well be able to simulate videojournalism.

That workflow of a newsroom, from years of working there, you've acquired generalised knowledge of the dynamics which may inform the new paradigm of net news flows.

Perversely, but not entirely efficient, there's something in serving an apprenticeship with experts before you're left to your own. Mine was the BBC et al

Have you noticed how many creative are polymaths? Ozwald Boateng, an old friend and super stardom men's designer, is now also making films.

Creatives, with experience, often also with a dose of failures, are highly tuned to what works. That thing called hunch, gut feeling is informed by variables including experience - and yes it doesn't always work, but enough times it does.

So if you're trawling through blogs, books, emailing inquiring thoughts to others in the face of this present environment, I wouldn't despair. Give IT ( knowledge) time to to become acquainted with Experience - and you'll be richer for it. That much I believe I have come to know in my own practice and as a senior lecturer and videojournalist.

Question is are you giving yourself that much needed time? Or are you also wanting a glass of water, quickly?
Posted by Dr David Dunkley Gyimah at 7:30 am