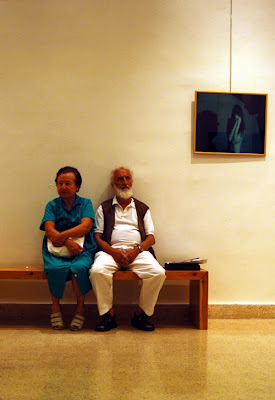 Unengaged - photo taken at Art Gallery opening in Beirut.
Why does this work? And how does the videojournalism need to be informed?
Bit more space to the right.
If videojournalism gave over itself to qualitative empiricism we might tap into something science has known for millenia.

OMG! It is the phrase that proceeds the sight of wonderment.

As an Organic Chemistry graduate, I'd mumble it almost every week we entered the lab.

Benzene, the equivalent of Final Cut, waited patiently for a new substrate to come in contact with it.

Then it did its magic, often on its own in the right conditions, sometimes requiring the right intervention, the deft editing hand pushing video clips around that would yield the right film.

Benzene was also the Jack the Ripper of the chemical world, highly elusive in its manifestation.

In basic chemistry, we know oxygen and hydrogen makes water and is fairly stable. We can simulate the molecules with lego bricks enough to make a 6 year old understand.

Benzene was a different matter. To grasp it you had to as Kekule did be highly creative, even a bit mad. You see Benzene exists in a dynamic state of flux between two similar but different chemical structures.

Madder still when you left the practice of the lab and went metaphysical talking nucleophilic reactions, you entered the philosophical world of chemical reactions. OMG, there I go again.

And then you learn that power of empiricism. Science got better by testing and retesting. And each time a "rule" came along, there were others looking to finesse or even break them putting themselves up for peer scrutiny.

Beirut by night, Cheek by Jowl. Commercialism rubs shoulders with the legacy of Beirut's struggles.

In videojournalism we can go molecular as well. How do you get good pictures for instance. The trainer you're working with will tell you "rule of 3rds". But why is it 3rd and not 5th?

And might it be considered that the rule of 3rd was a matter of convenience for George Field one of the progenitors that lent the rule, which really is a guide.

That's not to say the technique isn't invaluable and is responsible for some of the best images around but packaging as it is makes good commercial sense.

The rule of 3rds is benzene inside the lab. So what happens when we go to the drawing board?

For that we have to indulge in cognitive reasoning. The science of seeing and perceiving. You see words on this page, but what you perceive is something different. How do you make sense of these words, and why will its context mean different things to different people?

See you next week

+++++
David is off to the Welsh valleys for some RnR and great walks across the felds.