Creative journeys to expand the mind 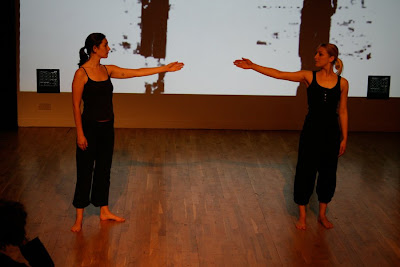 SMARTlab's ethos of practice-based learning is captured in Kate Sicchio's performance at Stratford, East London.
Here for her amazing showreel.
"What's it like?", he asked. There was a hesitant pause.

In between the question and the actual answering, several contemplations computed, like the flapping time-change mechanism of a train station's timetable.

Either way you wouldn't understand was the final thudding-to-a-stop thought.

But that's such a cop-out, such a disinterested lie.

In the film The Matrix, Morpheus says to Neo: "Unfortunately no one can be told what The Matrix is. You have to see it for yourself".

That readily sums it up: "Unfortunately no one can be told what a PhD is. You have to experience it yourself".

There is no experience I can share with you that comes close to the emotional and physical ride of this study programme.

It does not discriminate. It does not favour. It hurts your sinuses as if you were tussling with nature's elements and it leaves you exhilarated when one of its several summits has been breached.

At this point there are two broad reactions to this description. This moment where you are in reading this text you can either say: stop whining or phew.

Frankly both work. That's why this programme is unique.

You hate it, love it, would quit, would push further, and those feelings are wrapped in a big ball of energy, that releases unpredictably. A Nova of sorts. 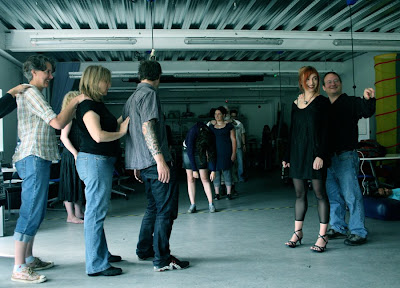 SMARTlab morning warm-up sessions. A stand-up massage on each other in the lab's space.

One giant step.. It's been a week of that. Small steps, and the one large one, working towards finding a new plateau for creativity.

For the last year and half we have gathered. Some have been gathering much longer, much much longer, but the motive is the same. 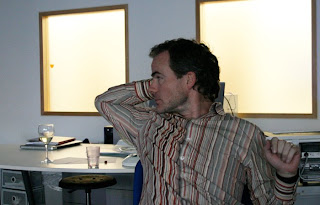 To scratch that itch. The question: Is what I'm doing, what I am about to tell you about, does it constitute new knowledge?

Can that knowledge, your epistemology, can it stand the rigorous bludgering of others - those with bigger shoes before you.

PhD student Will Pearson takes five, before the next programme.

The answer is not yet forthcoming, but the belief matched by physical work is what will provide a window of exploration.

There are many programmes, but I can tell you of only one, and draw on comparative hearsay and the grapevine: SMARTlab.

SMARTlab is The Matrix. It is the matrix of the most incredible people you will ever come across. Not just, as I'll explain in what they know, but, and this is crucial, in what they give. 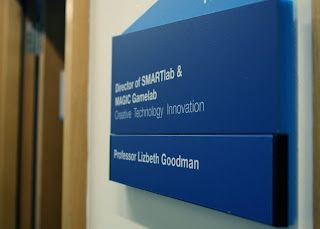 SMARTlab is the gift lab, run and managed by extraordinary people, whose head Prof Liz Goodman, for the uneasiness of sycophancy I shall just nod and say enuff said.

The ethos draws people from different strides of life; many accomplished at something over many years, thirty is not unusual, at their peak.

And now they are trying to wrap that in theory. When we stand in a circle, it's very easy, as many have testified to say: "Frankly I don't know why I am here".

The Meaning of Life


Bruce Damer, like everyone else embodies this selfless learning, a figure whom on the other hand will leave you in awe and utterly breathless. His background includes NASA. His PhD addresses quite literally the meaning of life.

Bruce is creating the EVO grid which will simulate the beginning of life and how we came to be.

That line in the Matrix rings in my head when Cypher exclaims: "Jesus", after asking Neo if he knows why he is here. 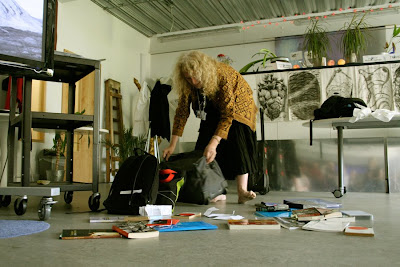 Chrissie Poulter researching theatre games unpacks one of four bags replete with books to demonstrate the level of work involved in away weeks at the SMART lab
A glance to the left and there is award winning Cathy O'Kennedy, dancer and choreographer, researching The Devine Normal. I cried at her presentation this year.

It was so, so beautiful as she spoke about her influences, her own journey and read out her mission in what reached my ears in poetic verse.

Minutes earlier she had danced mellifluously. The dance alone I would have paid to watch in London's West End in the same frame of mind not to long ago I watched the acclaimed Sylvie Guillem & Russell Maliphant's PUSH at Sadler's Wells Theatre.

Steve Cooney's research in Melody and Rhythm eloquently deconstructs music, to show how he has devised teaching aids to understand scale, how the Beattles used chords to set the mood followed by those meaningful lyrics, where in Steve sighed to say that's the brilliance of song writing.

A day earlier Steve had been playing with Sinead O'connor . Here he is on the right in this video with Sinead.

"What was the set up like it Steve?" I asked.

"Oh there were three of us on stage playing to a big audience. I imagined big as an understatement, something more Glanstonburyish.

And it goes on forty to fiftish cohorts at full strength sharing this space, presenting to each other critiquing - all with the aim of adding something that little bit or lot more to what we know about what we know so far.

All the while we are guided by a team of experts.

Interactive videojournalism
And somewhere in there I'm wrestling with my demons, 25 years of media condensed into this singularity of studies aided by many extraordinary supervisors, particularly Dr Chris Hales and Dr Sher Doruff. 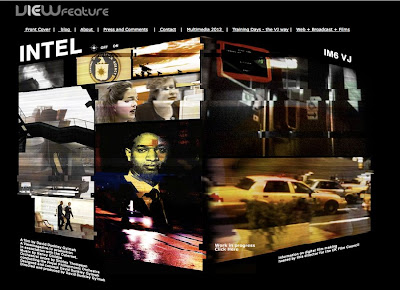 Can I show how video through various constructions induce different emotions? No that's not the PhD, but an aspect of solo videojournalism wrapped around an individual with the skill set of online innovative spatial production.

We've just completed our annual retreat, one of three in the year at UEL, living off 4 hours sleep for the last five days - 6 hours the previous weeks prepping thesis chapters and the rest.

So this is in way an introduction to the group, and a journey,and something I intend to come back to again and again in the hope of continuing that ethos that drives us all; creative journey's that expand the mind.