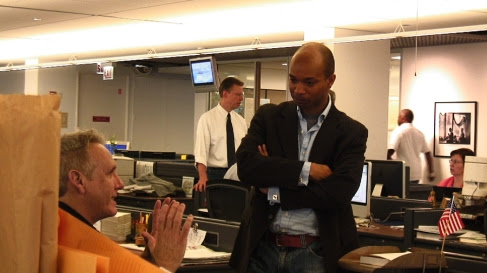 There's what you want to do and that which you have no control over.

Our world is driven by both. On BBC Radio 4's Today programme Professor Susan Greenwood was pitted against Emily Bell,  director of the Tow Center for Digital Journalism at Columbia's Graduate School of Journalism.

The former argued a structuralist approach to technology. It's purpose must be determined as  Radio 4's tweet  states [BBC Radio 4 Today ‏@BBCr4today7m] Susan Greenfield says: "We need to learn to harness technology. We can't sleepwalk into this and assume because it's new it's 100% good."

Emily Bell's approach was post structuralist. We use technology to create our own realities and we do it without necessary knowing, what we're doing.

As a videojournalist, a former BBC producer completing my PhD into news production, I know both sides of this argument and they are separated by pragmatism and theory.Yes ! That old hoary chestnut.

Our schism with knowledge is predicated on this, a state of play which emerged  from a necessary reboot  of academia placing a higher emphasis on theoreticians in the 1970s.

If you live in this matrix world of socially connected networks, you're inclined to ask what's the fuss?
In 2006 I interviewed Dan Gilmore in San Antonio, the start of my peripatetic career.  Gilmor's populist We this Media constructed is a sound rhetoric how technology was changing the way we connect. Why was this happening I asked Gilmor? His answer was pithy, "because it can".

As with many intellectual arguments, whether in politics,  BBC Radio 4, or the work, there is no right or wrong and the outcome is a matter of hermeneutics. Without structure , we blithely leave life and our businesses to chance.  Yet our history has demonstrated how chances has been responsible for our livelihood e.g. penicillin, the motor tyre, going shopping.

Every single social app you know of has a structural beginning which was inconsequential to the creators in so far as becoming a media beast. Facebook, Twitter, the telephone, camera have histories of intention. Yet co-opted by others in a non-structured way they find renewed meaning.

The discourse on radio provides a means to hear learned arguments from both sides. But the real winner is to be able to see through this and understand the interconnectedness of these positions.

If anything the next generation of academics may have to be steeped in both pragmatism and academia, bridge the divide between rhetoric and neo-sophism. Acknowledge more explicitly  there's what you want to do and that which you have no control over.

Then again, that would nto make for good combative radio.

David Dunkely Gyimah of  viewmagazine.tv is a former BBC  and Channel 4 News producer with media experience spanning 25 years. He's worked for Newsnight, ABC News and is an academic and filmmaker currently competing his PhD. He has presented at ONA, SXSW and Apple.
To contact David email him at David (at) Viewmagazine (dot) TV

Posted by Dr David Dunkley Gyimah at 10:12 am