Viewmagazine.tv which has acted a repository for storytelling in videojournalism is being overhauled.

By David Dunkley Gyimah. Connect with him on Google

Whilst previously centred upon videojournalism at large, supported by aspects of multimedia and innovation, it will lean towards the following:


Years back I made a point on videojournalist exemplar Colin Mulvaney's blog that the nominal 640x480 media size could no longer be an issue and that the impending issue would be one of skill set.

Ten years earlier I was struggling on Mrdot, my first site, how to upload video on a 28k modem.  We did so using Flash. Necessity yields invention.

Solo filmmaking which is in vogue now with the Canon 5D has spawned a slew of sites proclaiming the arrival of Cinema Journalism. I hasten caution in your acquisition of knowledge from sites where supposition and beliefs are corralled as a substitute for theory and experiential  knowledge.

As a journa-academic, the gulf between journalism which posits theory to often support sales is often different from academia which more often than not supports theory as a critique on the banal by using rhetoric.

Though yes academics too must sell books, but as any Masters student will testify that to prove a theory is to present your case logically and be able to reflect on your own short comings.

Take the photo still camera's video capabilities and the allure for  shallow depth-of-field which has given Cinema Journalism a new philip, but cinema journalism is not new. It can be traced to Mikhail Bakhtin, Vertov and Rosellini.

Often though, anything outside the experience of our life times is given short shrift. Why else would two world wars mean very little to present generations. So social media, and say data scraping are also viewed as new.

Thomas Hobbs circa 400 years ago detailed what made us social, while Turin is the giant all data scrappers stand on.

These neologisms appear new because of the containment powers of the old media and undoubtedly the presence of facilitating technologies.

My own experience with cinema journalism comes from 1999 with my film for Channel 4 News, the UK's fourth network, called Successor Generation (See picture above) which featured the new South Africans creating wealth for themselves.

It was shot on the Digi-beta 900 ( see above) and I used two interchangeable lens. That said Cinema Journalism or cinema has little to do with the latest camera accessories at a normative level. 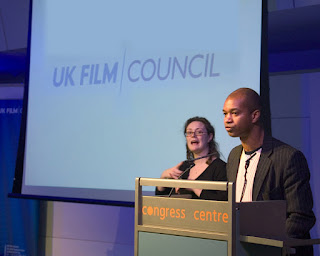 Otherwise how could the VX1000, a fairly mundane camera looking back to 1994 have spawned one of the most trail blazing film movement called Dogme 95.

In 2005 I addressed the then leading film funding body in the UK, the Film Council, about cinema journalism and developments in film making.

I am  delighted, however that these reinvigorated ideas are already gaining traction with enquiries from Indian and Asian companies and Universities in the US. The theoretical practises include the following.

More extensive media will be unveiled indicating how new ideas are forging ahead in storytelling and videojournalism in Cairo. Four years ago working with a leading media agency we started a programme.

Today, many of them are successful storytellers, but what has been rewarding is the direction they've taken.

Last month in Tunisia, Tahir Memento, a reflexive cinema story of Egypt's uprising was screened in their cinema, You can watch that on the front page of viewmagazine.tv

Tunisia in contemporary politics is the seat of the Arab spring revolution, and the videojournalists I met and worked with are the beneficiaries who are also finding new expressions.

I am looking forward to going back, but in the meantime, I have just completed a trailer of my visit, which I'll post soon.

This branding places them alongside their counterparts in more noticeable territories such as the UK and US.

Working with Annahar newspaper, I have previously posted details of my film working with the group. Again somewhere I am looking forward to revisiting.