What are personal sites for 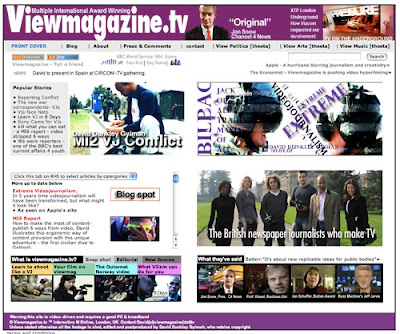 When I worked as a daily journalist and producer I often found there was nothing more frustrating than to present an idea and for it to be rejected. There were a myriad reasons; quite often that idea in hind sight was not editorially suitable, though having said that I reckon I had more hits than missess.

In programme commissioning, it's like pulling the teeth of a big white, ALIVE! I once remember the ebullient former Head of BBC 3 Stuart Murphy agreeing to a meeting after we exchanged emails at length. We had one of those marveous meetings - going on 2 hours. So what happened afterwards? Er nothing. I'd been passed down to managers who had no vested interest.

You soon learn commissioners have their own set ideas - of course they've got to - and you're either a name to help them or you're an irritant. And this came after working/freelancing for the likes of Newsnight, Channel 4 News, ABC News, BBC World Service... and so on. Mind you having worked for those organisations doesn't guarantee I know what I'm talking about.

But if like me you had a fair few ideas swilling around in your cranium what were you to do?

One evening I started toying around with whether I could get some of the programmes I'd made independently out on the net. Why not, what else was I going to do with them otherwise.

viewmagazine.tv was my outlet. I wanted to combine several elements: videojournalism, a fresh look at online design; Flash movies, audio files, video hyperlinking files and possible if I could my newphew's pet dog Scotch.

Some people got it and were deeply encouraging asking questions that I always tried to reply. Others hurled abuse - woops, what have I done.

There's really not much you can do here, an I gently tried to bring to the attention of those that this wasn't a publicly funded site and that with some humility you do have a choice. The site was built around ideas I had, perhaps some of them stubborn. But yes I understood what some people were saying, particularly if they'd been reccommended to the site and thought... what the heck is this? It breaks all the conventions.

I guess if we deign to produce anything new rather than derivative of something else you're heading for some public humiliation. Viewmagazine isn't perfect.. ohh noo! But it's still my attempt to offload issues I have come into contact with.

And that to many students of journalism is the only bit of advice I can pass on. The medium and profession is changing. More and more managers are likely to look for someone with net skills. In ten years time heavens knows what journalism will look like, but I am certain, there will be a stronger component than now online.

Publish and be damned. Let tose ideas go. Learn CSS. Learn Final Cut. Learn Flash. Learn After Effects. Learn Photoshp. Learn how to use the camera as a journalist and the psychology of how we consume all this.

And yes you'll be criticised. In some ways that's a good thing. Once in a while a genuine commentator will add to site, by making a salient point. But in many ways you'll control your own media. We are about five years or less away from broadcasting taking the biggest batering.

It's questionable whether it may even survive in its present state. Hopefuly you won't have that to worry about. You'll already be a jack of all trades and master of many. That much I'm going to be telling delegates gathering at Bilbao - where 400 odd TV stations meet as part of CIRCOM.

See you there.
Posted by Dr David Dunkley Gyimah at 8:27 am