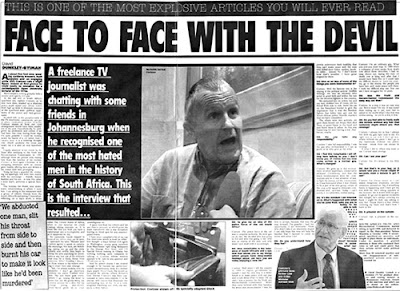 "We stabbed him 35 times and then burnt his body ... while that was happening we were having a brai ( barbeque) nearby... " Coetzee would later tell me.

I was at the Holiday Inn in down town Joburg with friends eating when a senior South African broadcast manager spotted him. "I want to talk to him. I have alway wanted to talk to him", I said. Whilst I was a freelance correspondent based in South Africa 93-94 the opportunity never arose. Now here I was some years on (98) and he was in talking distance.

It sounds so long ago, but seems like yesterday

I approached hands in the air talking courteously but loudly so he could make out my English accent. At his table, four friends all packing and his son stared up.

Then he agreed. A journalist who had never held a dvcam in his life was given the camera and a few instructions and then we started to film. I'll post the interview on viewmagazine.tv

What are some of the things his done?
Why did he do what he did?
Did he not feel any remorse?
Is he a free man? ( Coetzee got amnesty for talking to the Truth and Reconcilaition Commission) But is he a free man?

Then after 30 minutes we wrapped up, chatted off camera for a while and the star formation his son and colleagues had formed around us eliminiating any blind spots from a potential assailant dissipated.

What did I get from the interview? The unique opportunity to hear a calm rationale of why he killed and what he felt. He talked about being a reformed person, a Christian. I felt I could have asked him anything and he would not have shirked from it. It's one interview I wil never forget. You can see the unedited version soon.

Footnote: this is one of those incidents that shows videojournalism strengths. I had a camera, sa an opportunity for a story and within minutes had a remarkable film, and because it was on dv, its physical integrity has held well.
Posted by Dr David Dunkley Gyimah at 7:38 pm