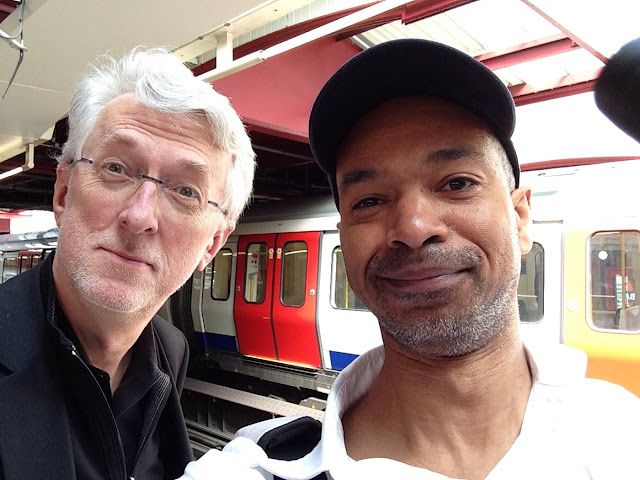 I have just finished reading “Death to the Mass. Media must rebuild its business around relevance and value, not volume”, by the indefatigable Jeff Jarvis — a modern eclectic media philosopher.
Jarvis straddles the analogue and digital world of journalism with a firm prognosis of its woes. I first came across him at Dale Peskin @dalepeskin and Andrew Nachison @anachison WeMedia conference at the BBC and Reuters in London, in 2006.
Those were effervescent days, as trad. media experts tried to hold onto their halcyon memories. The bruising between journalists and bloggers was gargantuan. ‘You’re not a real journalist’ were the experts’ riposte. Jarvis in his trademark wit was carving up naysayers. 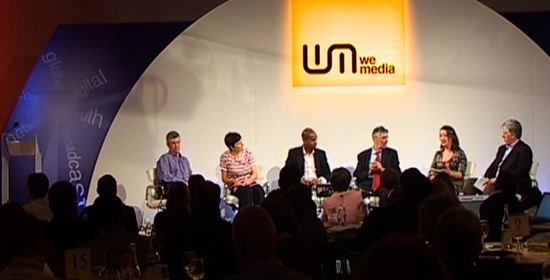 I had been invited by Wemedia to share a podium on the future of news. I was rubbish! I behaved too meekly; the usual hyper me had deserted, stuck in the bathroom. Afterwards I made a line for Jarvis for a swift interview.
Here’s the exchange below. Years later, in fact 2014, Jarvis invited me to CUNY as part of a group of people talking about the future of news. I continued to talk ‘rubbish’ with the following.
If video was going to be the next big thing on the web before YouTube struck, I said, which got me my Knight Batten award in 2006, cinema journalism — self expression and some — will in the future separate the wheat from the chaff.
Jarvis might not remember this, but his words afterwards were something to the effect I liked your idea cuz it’s mad.
I was reminded in his article about an interview I did with my MA students in 2006 called ‘If’. If you could change one thing, I asked, what would that be? Fears of Islamophobia crop up and listen to what Daniel Kofi (pictured) says at 1.13".
Daniel chides the media for reporting events with no recourse to wanting to getting involved in the issues for social public good. It’s an absurd idea by any standards. Journalists report, and like wildlife photographers don’t get involved in nature’s fights.
Jarvis writes in his article.

Rather than continuing to try to maintain our content factory, whose real business is selling eyeballs by the ton, imagine instead if news were a service whose aim is to help people improve their lives and communities by connecting them not only to information, but also to each other, with a commercial model built on value over volume

Daniel’s feeling this. I’m a Brit-Ghanaian. I get this too. I went to school in the former British colony and remember its television output. But at some point, the relentless mass export of the Western TV model hit Ghana too. That style of news’ attrition, ‘ he said, she said’ popularised by Jay Rosen, and ‘if it bleeds it leads’ carpeted any semblance of what TV as a social glue could achieve. In this post looking back on the BBC I explain why.
The history of innovation has often been the transmogrification of ideas, or a tool, modified, sometimes lifted wholesale from one culture or discipline to another.
Kofi’s idea of media that existed in Ghana not so long ago could have currency in today’s journalism, but the experts no doubt would mock its approach. Further back, take the impressionism movement in France in the mid 1800s. They owe a debt of gratitude to Commodore Matthew Perry who would bring back from Japan wood block prints that the French would covet.
Facebook’s notion of connecting people as content, amplified from Locke, Searls, Weinberger and Levine’s The Cluetrain Manifesto is predicated on the ideas of what communities were once, neighbourly, homely places where every one shared, spoke over the garden wall, mimicking civic journalism (circa 1990).
Outside journalism’s big tent, technology has become its defibrillator. InWhen Old Technologies Where New, author Carolyn Marvin brings some cautious thinking to this perennial tech-fest in news. One by the way which has been created in no small measure by businesses and marketeers seeking to create new revenue streams, but it’s also served a purpose breaking up TV and traditional journalism’s monopoly.
Take mobile journalism, a word coined in the 1960s by the late Robert Drew, but found new marketing fame as a paradigm shift in the swift flow of information in this millennium . So far so good. But in its dominant incarnate its architects seek to homogenise its form and style towards traditional broadcasting’s achilles. And the idea that it’s the cure all also repeats analogue journalism’s mistake. Source and pick the best tool for the job and let no one tell you differently.
Marvin’s book shows that the frenzy surrounding present tech isn’t new. We’re wowed by technology. It can often break leaving editorial thinking in its wake. We’re left to suss it out through what Professor Brian Winston calls a supervening necessity. That is, once we find a social purpose for the tech it kicks into action. But who prescribes that social framing? The victors write history. Have you ever thought why, say, given all the art-painting movements in the world, you’d struggle to come up with a handful from Africa. Meanwhile, more tech doesn’t necessarily alter the way the tone and message travels within reportage.
We gather around technology and create deterministic and causal meaning based on a hegemonic modes of thinking, but societies aren’t static. Their tastes and needs change, notwithstanding their irrational concerns too.
Once again, these instincts are more redolent in different cultures, or eras, than the ones we might recognise in our own. Today, journalism often resembles what a senior BBC exec calls ‘air conditioned’ journalism as brilliantly illustrated in this piece by a BBC journalist.
Professor Michael Schudson, author several books, such as The Power of News describes journalism as a cultural product shaped by literary and social conventions. It’s something we’ve tended to forget, because of this dominant thesis that surrounds the form, which jettisons cultural and social references.
Which brings me neatly to my conclusion. If you could tell stories, aided by technology to be nuanced with story form’s language, providing insights into primary and sub conscious meaning ( heaven’s knows we need it), where you could break the rules because PR and marketeers have you over a barrel (churnalism), what form of journalism would that be?
Working with Jarvis is another person, I’m a fan of. Travis Fox, now a lecturer at CUNY has a way of storytelling that plays on cultural nuances. There’s no cacophony of tech, but someone behind the lens who is a humanist wanting to tell stories that, as the video below illustrates, resembles, cinema.

Posted by Dr David Dunkley Gyimah at 12:32 am