Next month I'm speaking at the World Documentary Conference in Falmouth about this strange new film form called: videojournalism-as-cinema.

As with most academic presentations, I had to produce an abstract; a brief about my presentation, which is a couple of paras down.

But videojournalism-as-cinema is not some abstract theory of a film form. It was born from various questions. 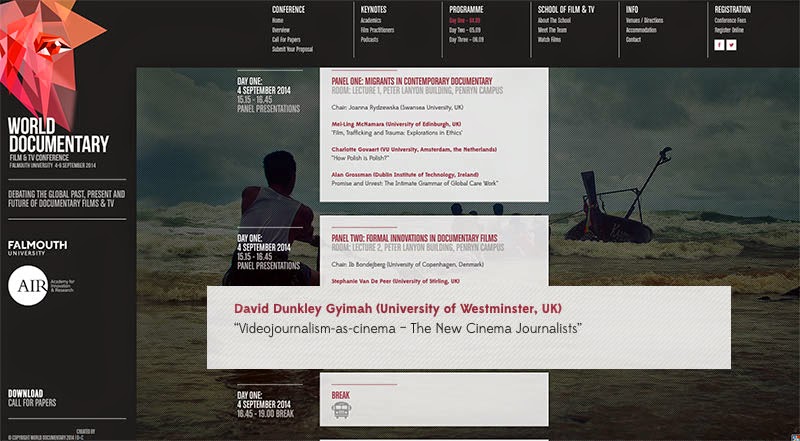 At its heart it proposes ways to reach users by considering aesthetics, form function, style, technology, cultural and sociological and ideological values,  and human behaviour.

This ‘common sense’ view has persisted when comparing the television documentary form and Hollywood’s subjugation of the word cinema to denote dramatic fiction.

Academic studies, coupled with the pragmatism of filmmakers have yielded forms such as Cinéma Vérité (O’Connell, 2010), Docufiction (Lipkin, Paget & Roscoe, 2006) and the journalistic essay in Personal Cinema (Rascaroli, 2009). These forms imbricate cinema modes e.g. visualisation, structure etc. with non-fiction forms, such as news and the television documentary.

In this presentation, using empirical evidence, David Dunkley Gyimah maps out the infusion of cinema in news making that stems from within the discipline of videojournalism.

An under researched field, videojournalism’s public reframing is much needed, however in his 20-minute slot, Dunkley Gyimah presents evidence of a stylistic form used by exemplary videojournalists, known as videojournalism-as-cinema.

Arguably, mains stream news (MSN) uses cinema artefacts, but according to Dunkley Gyimah videojournalism-as-cinema practitioners are more overt in their appropriation of dramatic fiction styles as influences, as well as cinema’s earlier framework in Russian cinema.

The implications are many, but in this instance, Dunkley Gyimah focuses on how videojournalism exemplars create news films that are memorable.

Above all it involves the effective communication of ideas involving a wide pool of styles.

David Dunkley Gyimah is a senior lecturer at the University of Westminster lecturing in videojournalism, documentary and online/ social network practices. A former broadcast journalist/producer at BBC Newsnight/ (1990) Channel 4 News and ABC News South Africa, Dunkley Gyimah is also one of the UK’s first NUJ recognised videojournalists in 1994. He is the recipient of a number of innovation and journalism awards e.g. Knight Batten and is chair of the jury for Broadcast Innovation at the RTS. Dunkley Gyimah is an artist in residence at the Southbank centre and has recently submitted his PhD that examine videojournalism and its offerings towards a future journalism. He graduated from Falmouth postgrad in journalism in 1989. His work can be viewed from the sites his built