The year is 1994. The picture shows the coming together for the first time of a group of people who started a revolution in the UK. They were chosen from 3000 candidates.

Almost 20 years ago, this diverse group launched videojournalism in the UK. You may be aware of videojournalism. You might even state you're one yourself.

But without rancour or arrogance, I would like to tell you that the videojournalism you know today, was nothing like the one practiced by the this group 20 years ago.

Unfortunately there is no record of them, except the odd post in my blog.

Similarly, for the videojournalists or One-man or One-woman bands, what you did was amazing, but Channel One created a model that was unique and has not been replicated since in the UK.

Those details are wrapped up in a doctoral study, whose finishing touches are being put in place.

If you look in the picture I am second to the left, on the second-to-back row. At the immediate right side, next to the Channel One logo squatting with a camera is my friend Steve Punter.

He was one of the best videojournalists and an amazing intellect who went on to work for many of the UK networks, creating some of the best television you could watch.

When I wanted to start my PhD to tell the story of videojournalism I called Steve. We met and spoke for three hours, He provided me with material I couldn't believe I was hearing.

At times I was asking did we really work at the same place?  But his retention of facts and the fact that he was a videojournalist who progressed to management gave him a unique perspective.

I am so indebted to him. I can't wait to finish this thesis. It's been a relentless six years with its own back story in it to be told for another day.

But this post is about a more immediate issue; not about videojournalism per se, or Channel One, but about my friend Steve Punter.

Steve died two weeks ago. The circumstance surrounding his demise are unknown, but it appears he took his own life.

In spite of his brilliance, his grit, his exemplar work and huge personality, for reasons that make me angry at the state of affairs in Britain, he couldn't find work.

He'd been over looked or ignored for positions which on merit should have been his. He was the best man for any media management jon.  His loss isn't just a gaping hole for me and all that loved him but truly to anyone interested in the future of media in the most exciting and radical way.

He understod and bridged old school, classic story telling and journalism, with the new edicts and ideas enveloping social and digital media.

They, editors and programme makers, in the UK didn't get him. I empathise with this. The UK can be a harsh place to present ideas.

Another videojournalist R V Vadgama from 1994, now working at GMTV wrote a tribute to Steve. I choked reading it.

R.I.P Steve - but I know this will not be the case, because in the place he is now in, I'd like to think someone is finally listening to him and thinking wow what was wrong with everyone on the other side.


Steve Punter being interviewed by me. We're laughing because Mac Dictate which he is speaking to via headphones keeps screwing up his translations.


This is the message that Steve left, with this picture below. He was an extraordinary photographer. 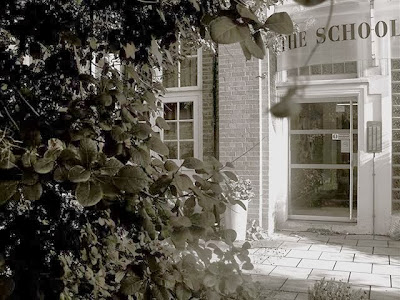