The Lone Videojournalist, has ended - Next its the Super Collaborators.


I have put myself up for sale - a risque move amongst those who will fail to see the point.

Awww! Do I really need to spell it out? So, like, I'm not selling myself, but my attributes, which obviously come with me. So yes, I'm selling but not in that maladroit way.

But I am making a finer point.  If you're the uber digitalist working alone? You shouldn't be. Collaboration is about to get supertanker big, or at least if trend extrapolation is anything to go by, it should.

The title of this post then is a reworking of French philosophers Barthes and Foucalt's insight into the author and imminent death of the author.

Having found their voice in the renaissance, the concept of an author marking their work with a distinct signature had waned for these two towering figures.

Barthes main point was the moment you attach authorship to the text, you limit its potential.  It may sound existential but what Barthes is getting at is to remove the identity of the author and in many ways enjoy the product for what it is, not the name of the person.

Would One Direction's Best Song Ever, be a great song, if you didn't know it was One Direction?  Er don't answer that nearly 157,000,000 have. Barthes obviously wasn't thinking about Boy band branding.

The Author
However, authorship or identity is a difficult thing to achieve. As Focault noted, everyone can write, but not everyone is an author. Similarly, and this makes sense  - not all twitters, videojournalists and social networkers are the same.

But there's a broader point and its the economic scarcity principle that provides an alternative argument to the death of you, the lonesome twitter dancing, You Tube uploading, Instagram mover and shaker, author.

The more something becomes available, the less desirable it become. Its price, the level of entry removes its mystique.

If you remember the frenzied days of 2000 to 2005. To blog was to becoming, to video was to look venerable. To tweet before anyone else had (circa 2007) built you a loyal following very quickly and was considered outstanding.


The room all of a sudden got very busy, and very crowded - all for the right reasons. Because, now we're hearing from people whose views could outdo guests on David Letterman or strip Paxman of his king of the media jungle label.

No! Even if you had the world's foremost 500 brilliant people to listen and follow, when does your life begin?

Sea Change in Education
The change from the individualist to a collaborative group happened in education about 2005, albeit implicitly. Lecturers woke up one day to find Gilmor's aphorism of the Wisdom of crowds staring them in the face.

Now, for the first time in public, the combined intellect of a wisdom of crowds of students congregating on Facebook could challenge the pedagogy and authority of the academic. Few institutions had an answer, rather than roll with the punches and devise new methods, the ostrich scenario dominated.

Many educational establishments survive because of their analogue knowledge [see last post]. Some provided a glimpse of new working-educational practices to match the sign of the times. One of those has been a government-run programme called KTP.

The knowledge transfer programme  (KTP) sees a recent graduated hired by a company to drive a project and mentored by an academic. Er, I happen to be one of the KTP advisors.

Meanwhile back in the industrial world, the notion of the videojournalist, twitter and You Tuber being dead then can be viewed as an inevitability. It comes with the dynamic swings and roundabouts of society. Societies change and when they do their needs alter.

The difference today is we're living out decades in a matter of years. Years have contracted to weeks.

The new Authors
Tarantino, Soderbergh, and Spike Lee may sound like they did it themselves when the film trails " a Tarantino film", but even they know it's a collaboration between many workers and that only a sleight of hand seeks to reward them as the progenitors.

The film industry is a good barometer in how to respond to the market place. It is one of the most durable industries second to the arms exports in the US for the money it generates. Throw as many invectives at the studios as you can, they're skilled in the warfare of driving their businesses.

If you were to note an overwhelming change to the movie world in view of the social, digital world of everyone-can-do-this, it's been about raising the bar to a level of super collaborations.

World War Z ( read Rosenblum's take on this) Avatar, The Great Gatsby...Films, have gone epic. The list of collaborators is the size of a small country and eveyone is a winner.

There's evidence of this success in journalism. 18Days in Egypt,  Storyful, and these little known about digital student class in India generating digital heat by bringing everyone together.

Collaboration isn't a new thing.  Ask Brian Storm of Media Storm - one of the new agencies in digital media which is blaizing a trail.

Also, Viewmagazine.tv - my site won it awards for its collaboration, as did another project called the Family, coming second place at Channel 4s Digital Awards.  It's just that collaborations this time has a more visible value in a market where so many people have the same or complimentary skills, and you don've time to read what 500 people continually say.


Size matters! Size and quality makes for an even more interesting mix. Admit it, when Michael Fassbender, Penelope Cruz, Cameron Diza, Javier Bardem, Brad Pitt and Rosie Perez are appearing in the same film - and think of Pacinno and De Niro being featured too, that's epic.

So I am for sale, and you should too. For the potential of the outcome to do something epic. I have done a few, but time to raise the bar.

One aspiration I have is to be involved in a new type of university that marries multi-disciplines in a way that we've far from accomplished at the moment.

And lets start it off in Africa, Ghana, where the difference would be palpable, otherwise I'm good anyone else. email David@viewmagazine.tv


Read The theory of videojournalism - one of the site's most popular blogs. 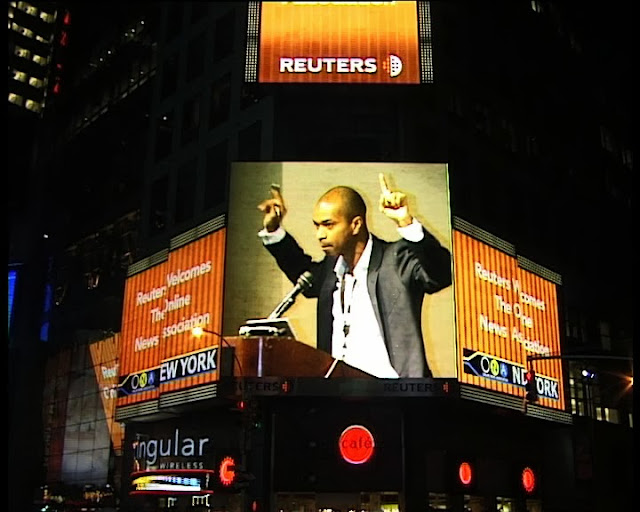 David Dunkley Gyimah  presenting at the ONA NY relayed at Time Square. David is a senior university  lecturer completing his PhD into a future of media. He is an artist in residence at the Southbank Centre. This year he is a chair of the UK's foremost television journalism awards The RTS.
Posted by Dr David Dunkley Gyimah at 4:13 pm