Video journalism's margins towards the centre of tomorrow's creative form

I have long argued the scope in video journalism. 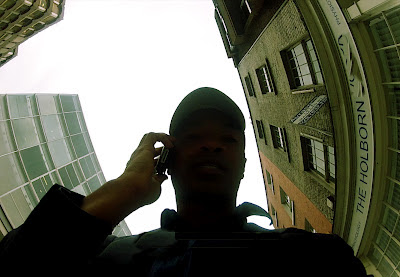 I'm on Chapter Seven of my 70,000 word thesis, and with this corpus almost intact have the opportunity to embark on a number of tours, to explain a past, present and future of videojournalism.

Predicting the future is as I have said a mug's game ( See Apple's site for what I spoke about some time back).

How do you know has to be the first question anyone should ask.  I have conducted various ethnographic studies in China, Tunisia, and the UK.

So whilst, yes, it would be a bold person to claim they've a hang on the next trend, using methodologies such as the Delphi procedure, Trend extrapolation and Media history, some interesting results emerge.

One question you could ask yourself is with broadband beyond your wildest dreams, what could you do, that you haven't done so far?

Gamer the film provides some examples in spatial film making, whilst my trip to China and hologram (previous posts) videos is worth considering.

However in breaking of from writing, I wanted to reinvigorate a conversation on Montage.

Last week in one of my first psychovideojournalism tours, we ending up at Trafalgar Square where I shared ideas with the team on creating montage.
Montage is the apotheosis of film form and extremely difficult to pull off. You can trace its background to the Russians in Pudovkin, Eisenstein and Vertov.

But one of the daddy's of montage to create it as a genre was Donald Siegel, who played a huge role in enabling the form to possess its own identity.

Remember montage, as seen in the modernist guise of CSI Miami etc is often used to show the transition of time within the body of a film.

As a stand alone, it conveys ideas in what semioticians view as unorthodox shots often prefiguring some symbolic meaning.

A symbol is something that bears no relationship to what you see. You make up the meaning or in some cases societies convene on some understanding e,g, a red sign as a triangle.

In Se7en, you're no wiser about the image, but as a whole the meaning its frankensteined. That is together the sequences signify strange dangerous even criminal behaviour.


The film montage sets the tone. Montage is used elsewhere in "accelerated digital" to convey information in motion graphics. Motion graphics, which stems from graphic artists moving into the moving image is itself old as film with intertitles, BUT, you'll have a jolly time going through films in the 1960s and the great Maurice Biner who made several titles include this one below for Charade.

Anyway, below are some more opening titles, from the likes of Snatch  and the last one from Tarantino because it represents a different form of Montage, as a music break within a film.

BUT more importantly it creates the famous contrapuntal feeling again developed by Eisenstein. The scene works against the images to recreate something that shouldn't work, but does.

See you in Denmark next this month and then Cairo with UNESCO talking about the future of the media in December.