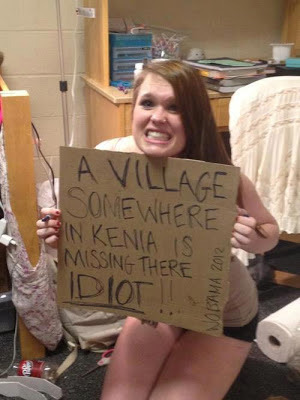 I can guess what you're thinking? You're not alone!  But you're wrong.

A couple of days ago,  I wrote about the reality/ appearance divide as being fundamental to news as much as it is philosophy, then this story emerged and went viral which illustrated my point in its starkest terms.

Contrary to what you're thinking and your impressions of the young woman Kim Stafford (tumblr), she is in fact an Obama supporter who was lampooning the Tea Party's opinion of Obama.

The spelling of "Kenia" is the denouement. The revised story was broken by news reporter, Kyle Whitmire, who spoke to her.

How a lot of people got it wrong, is not an anomaly, and that it's referred to as news or journalism is itself an interesting thought.

If you follow my blog then you'll know that:


The deceit that news has come to inherit was the idea it represented the whole truth. This has not been purposeful since people behind respected news making are honourable folk.

A two-minute story purportedly told you all you needed to know, as did a five-minute and 15-minute. But the flaw was not in the length, though it plays a part.

By the way the two-minutes was an arbitrary figure adopted by managers in the 1950s fearful any lengthier news would put off viewers. The issue was the assumption of total truth.

Perhaps one of the worrisome features that has spawned is the classic metier between US and European news. In fleshing this out I'm not for one moment claiming anyone system is better than the other, but that it requires less prurient positioning by its agents.

Take Robert Drew's cinéma vérité. It was brilliant and is brilliant. I love Primary and Salesman and could not envisage seeing them done any other way. I have spoken to Robert Drew and Albert Maysles behind Salesman.

But the form's truth values, though at the time were seen as revolutionary and a breadth of fresh air, by today's evaluation puts it as no more superior than Jean Rouch's cinéma vérité. That's not my assessment, if you trawl the literature, you'll discover this.

Here's the rub though, the gene of those systems has largely been adopted by a new generation of news makers labelled videojournalists.

In other words different constituents are at odds with one another, though it's not a war of attrition, how we get to the truth.

News is a language defined by cultural literacy

The fact is language and cultures are different, no matter how much the Net brings us together.

But if you for one moment accept that journalism is a cultural and literacy convention according to Schudson, which they did not in the 1950s, you're closer to realising the stuff of old cannot be maintained.

It is for that reason that when working in Tunisia, Egypt or China, I work with videojournalists I train to accommodate what they do in line with their cultural values, and normative principles in news' traditional values that need challenging or not.

Also as newsmakers we're not empty vessels who create narratives. You and I might both be able to agree the way the news on Kim Stafford  was wrong, but the manner and nuances in which we present this may differ.

Rosenblum tells a story that is rich in cultural significance and served as a launch pad for him to start to wire together videojournalism. He went to Gaza, to learn about palestinians, he was warned against meeting. Cultural pluralism, and your background, is key to interpretation. Interpretation is what you do in journalism.

The reason why the BBC's interview for jobs, at least during my time of employ, used to value travel ( inter-railing etc) was it expanded one's horizons to understand others.

I spent my formative years in Ghana. It valued TV, oddly enough as a cohesive tool ( A pre-facebook tool) so much so that its deference in news was over bearing. It was a bit like the BBC of the 1940s interviewing a government minister. "Minister Poole can you tell us what you;re doing today?"

But when we took videojournalism to Ghana and South Africa in 1997, the results were remarkable. How traditional news making could corrupt videojournalism is a flag to make us aware of conversations we're likely to have in ten year's time as opportunities lost.

If the key concepts you hang onto videojournalism is the break in shooting your own news, I fear you might have missed a point.

As David Hockney said, a new form only became available in Art when the easles and paints became smaller and more mobile.

By the way the US-UK and newspaper and broadcast videojournalism divide should not be seen as a broad brush approach on my part. By doing so, I commit the very sin, I'm critiquing. Brian Storm, of Mediastorm, has a great insight into concerns I share. That said it is a concern nonetheless.

David Dunkley Gyimah is a panelist at NewsXChange in Barcelona. He publishes viewmagazine.tv which examines the history of videojournalism through his work and others and is a jury member for the UK's top broadcast news awards, the RTS.

A part of the PhD examines videojournalism. There have been a number of exemplary scholars who've looked at this nascent subject and they should be applauded.

The nature of any PhD delivering new knowledge to the community is to frame what you know, coupled with how you went about verifying to the point it can be called truthful.

In other words how you bridge the reality of what's happened, to the appearance of your presentation (appearance). Not so different from news really, except each has their own standards of rigour.

My approach is based on several knowledge-creating methods.  Parking them aside for the moment, I believe I know what I know because I was among the first official UK declared videojournalists in 1994. Thus what I talk about from the transition of traditional broadcasting to a dedicated videojournailist, and reception of videojournalism from the 1990s to the present, is a lived experience.

I know what I know because before it there was no network in the UK officially, by the NUJ's acknowledgement practising videojournalism.