The Tao of Eliot Rausch - new breed of filmmakers: Last Minute with Oden, and Limbo

Three students, illegal immigrants from East Los Angeles taught to film in a day, unfurl their lives over three months for the camera.

One counts her mixed fortunes. One minute jail, the next she's meeting US President Barack Obama, the other fights unsuccessfully against the deportation of her father and the third has become part of a murder investigation broadcast on local television.

Limbo (2012) set to premier at the Vimeo Awards 2012 in New York may likely carry the meditative style of its award winning director, Eliot Rausch - elliptical, events and characters revealed as fragments cohered by a strong theme around love, morality, loss, despair and some.

Rausch's oeuvre is temporality, the unfolding of the story and space in the shape of a Rubik cube splayed over a morphing canvas. Causality within his films slide and click into place in different ways for the viewer,  but everyone arrives at the end together.

The great French Philosopher Deleuze identified two broadly different schemas to this phenomenon: the Action Image in which the dynamic energy from the film emerges from the linearity of the narrative.Then there's the Time Image. Here consciousness, memory, non-linearity, reign freely.

Celebrated film scholar David Bordwell explains how in this genre style, fabula, the plot, the sequencing of events plays differently to the overall story.

New Spatial Cinema Makers
Vimeo's 2011 inaugural  overall video winner Rausch has marked his place. But if conceptually you stumbled across this post ten years ago, we'd be marvelling at the cinema poetry of González Iñárritu ( Babel, 21 Grams), who Rausch cites as an inspiration.

Before then Steven Soderburgh in The Limey (1999) Tarantino, and then much further back when Deleuze assualted the film world with his find Alan Resnais in Hiroshima Mon Amour (1959).

What unites all these figures across a wide span of cultures and time is a creative gene in impressionism and an unstinting respect for a brand of cinematic intelligent audiences that you'll find today within the likes of Vimeos gilt-edge gathering of directors and film aficionados.

Here, viewers revel in the interpretation of the works of film makers. The directors, to which I would add Rob Chiu whom I have known for over decade, ellide comfortably between documentary and fiction, motion graphics and the pro filmic, essays of life and the poetry of cinema. Each piece is a signature of a style honed from their visual digital ribonucleic strands.

Last Monday (5th, March, 2012) in a generous devotion of his time, Rausch spoke about his film making style, techniques and his centre of gravity.

Much of Last Minute with Oden has been amply documented on sites like HD Pro, so here's a synopsis, before the main course where eight Masters students, from Nigeria, Netherlands, Yemen and Palestine put questions to the director via a skyped interview. 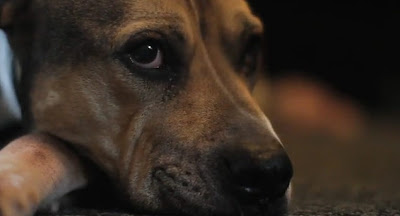 James Wood aka Woody, a close friend of Elliot is distraught. The ultimate moral question is upon him. His dog, sick with cancer is going to be put down, a very personal matter, but Elliot convinces his friend to document the journey on a a freshly unboxed Canon 7D.

Within the film, Oden's fleeting doe-eyed gesture at camera, friends biding him good bye: "tell Jesus we're coming" create deep empathy. And then the build up to its finale is matched in anxiety within the story, as much as a plot line using Woody's pained cycle ride in the rain enveloped with a haunting score.

Within the roll call of mentioned film makers, what's remarkable about this film is its turn around time. Shot within a couple of hours, edited within four - less than a day's work- uploaded for a million plus people to reach for a hanker chief.

Rausch's modus operandi is less the film maker,  more the anthropologist. He doesn't shoot himself preferring to observe and direct. Neither does he push at relationships with the camera, but principally finds meaning within people.

This has always been an enduring trait of great documentary makers, and photojournalists such as Yannis Kontos, who I have worked with  - the art of procuring whilst being invisible.

The amazing Amy Purdy  an inspiring woman, also a double amputee, cues a story which according to some critics was too simple, but Rausch finds purpose and profoundness in its simplicity.

Q and A Masters Students
When I saw that it was like someone hit my face, says Nigerian-born journalist Ruona studying documentary at the University of Westminster. She wanted to know about Rausch's motives in playing with silence in his movie making.

As Oden was being put down says the director, the crew, two other cameramen fighting back tears were being directed through hand movements.

I try and get away from talking head and B-roll coverage Eliot replies, adding he eschews archive footage in the way it coheres to classic documentary.

People coping with tensions in their lives and resolving internal conflicts was another student's theme. Jody questioned how Rausch delineated between his subject, Woody, as a character and friend and also victim.

This and many answers can be found on the audio of skyped interview below.Whilst Master student Lena from Palestine wanted to know how a director mediates reality without overtly influencing events.

This was a masterclass in creating docs in the tao of Eliot Rausch, but also in understanding the new intertexuality culture of film making.

They're a breed who with digital tools create their own pro impressionistic stories, acknowledging selflessly a need to share in thinking of others, and that their work is open for re-interpretation - an  immanent quality of the new elliptical directors.

David Dunkley Gyimah is an international award winning videojournalist and Knight Batten Winner, who is completing his PhD that covers new cinema. He is a juror for the UK's highest TV Awards, The Royal Television Society and an Artist in Residence at the Southbank Centre. His work can be found on his site www.viewmagazine.tv