Digital Futurism in Academia - what you might want to know

This article explores the emergence of the new PAs (Professionals - Academics) and how Post Century Digital is only now beginning to shape up to what will be teutonic changes (Doctoral stuff).

---
There was a time when as the erroneous saying went, those that couldn't make it taught.

It was wrong then, it's absurd now, because you dare not stand in front of a lecture without being digitally armed, and analogue confident.

Firstly,  the assumption that digital would usurp the media ways of old is still in its infancy so whilst there have been technological shifts, the seeds of comprehension can still be found in traditional norms.

You use twitter to successfully inform others. De facto, you possess strong research skills, finding and critically appraising good articles.

You garner new friends via Social Networks, but guess what, the rules and social etiquette of making friends lay in cognitive, not digital behaviour. Being selfless and loving thy neighbour is a caring human attribute.

Furthermore if you possess News subbing skills, and can turn the long winded into poignant copy text, twitter is a breeze, once you learn its own aphorisms.

THE RISE OF NEW UNFIXED LEARNING
Talking of subbing skills, the story of the Fishmonger's shop sign"We Daily Sell Fresh Fish Here", is the example par excellence. You don't need "Daily" said a friend, because you're here. Neither do you need "Fresh" because you wouldn't sell stale fish. And for good measure, you don't need "Fish", because its obvious. Here's Garr Reynold's take.

But those who use this story often fail to discuss the flip side to this, what I call "cognitive impressionism"

When I tell you don't think about the elephant in the room. What do you think about? So while in literary terms the Fresh Fish story has redundancies, we need the superfluous to trigger sub conscious actions. And you know all this because it has little to do with digital.

The digital trade winds that have swept through many professions, such as media, travel and music, have  impacted upon academia, but I believe this has, by and large, been minimal and reactive, and that a more nuclear impact is imminent.

In part it's being buoyed by the changes in society as baby boomers in the digital world mature, and  fiscal changes to macro and micro economies take root; crashes worldwide are hitting local economies. But also cultural and psycho-happening factors spawning new codes and new philosophies.

Thus the institutions of fixed learning is mutating. This article on "Universities face crisis as cuts crash in on academia" could apply to many universities in Britain and across the world. Will students in 2050 be learning en mass in settings as digital becomes all pervasive is a thought taxing educationists, if not it should?

The more here and now aspect of change is evident, albeit it'll be unrecognisable in a decade. You can see it in the following, the academic-professional Neos, or think along the lines of the Digital Futurians e.g. Kate Craig-wood.

No, they don't hack main frames, but they see the world as a matrix, creating bridges and forging alliances. They exist in the media-doing world and the academic, either lecturing or researching, eliding successfully between the two.

They run successful courses, sometimes their own and deliver needed assets to the industry at large. The world has really become just code, but with a soul.

You know of them through the likes of :

With their growth, fixed tertiary education can at the moment still rest on its legacy of brand awareness as a unique selling point. Another being the institution's accrediting status, but for how long?  Brands are not infallible ask Hoover the vacuum cleaner, better still Dyson.

And Vogue magazine's move into the sector of creating its own degree sets a game changing precedent. This year it's rumoured a national newspaper is set to launch its own degree programme.

If "Did You Know" is anything to go by then much of this below is just the beginning. 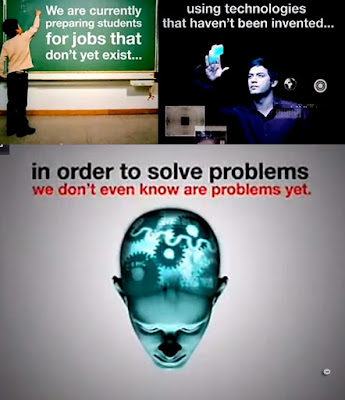 We are currently preparing students for jobs that don't yet exist, using technologies yet to be invented, in order to solve problems which require a philosophical understanding of not what's right, but more appropriate.


THE ACADEMIC PROFESSIONAL
Increasingly too, I have identified a growing pattern amongst the PAs ( Professionals-Academic).
They're what I would call Post Century, which is a take on post structuralism with a twist.

If post structuralism believed language in itself could not yield convincing answers and that reasoning needed to be situated in where you were ( society), and what was going on ( culture), Post Century - the age of the Digital Renaissance scores various philosophies in a way that tries to make sense of existing theories and certainly ones within the shadow of the digital age.

Two things to note from unpacking the last paragraph. Philosophy, the art of clarification, whilst never prescriptive is now begging us; I mean seriously begging us to entertain what was meant and what's going on now. We need answers.

The time when philosophy, as a presumed impenetrable obscure subject was meant only for academics should be abandon. Correction, indeed various positions are being challenged.

Last Tuesday, I invited Brian Storm to talk to our Masters students by Skype. Asked if he considered his stories to be one side as a journalist or thereabouts by a student, his reply was that he ceased to call himself a journalist because the idea journalism can be impartial is impossible, and misleading.

A week ago, I interviewed Richard Sambrook, one of the UK's most revered media figures who is my Morpheus pushing the analogy of The Matrix. He explained how ethics and impartiality emerged; yellow journalism and Pulitzer as standards to help the reader. And that it's needed today now more than ever.

My own penny's worth is the rediscovery of cinema without narrative, a place where Heidegger's Dassein emerges as a primary force. Here's a simple more recent logic. I just saw a tweet from the father of videojournalism Michael Rosenblum on the primacy of the iphone (Online course here) as a shooting device and one from Tom Kennedy on photographers shooting cinematically.

So first it was film, then video, then DSLR cameras, and now iphone. Reductive thinking would tell you simply it's not the device by itself and what it creates, but something else is going on inside the brain of the being. That's the frontier we're burrowing ever deeper to understand and explore. That's a strong area for me of what Digital Futurism is all about.