How Videojournalism Lost its Mojo, Died, and is being Reborn Again.

Videojournalism at Viewmagazine.tv: "If you start from the same building blocks from whence you came, the creation you envision may likely be a version of what you know. And in such cases the creation can be no more than a short lived one - a plaster".

I elaborate. At periodic cycles the knowledge within a profession effectively ceases to meet the new demands made on it.  There are many reasons for this.


Journalism is no more immune to these shocks as we've witnessed than professions such as medicine and engineering.

But the response to address these unknowns is a curious, but predictable one. Often collective knowledge within a company, institution, attempts a remedy by taking the status quo and looking to build upon it.

Videojournalism is a great example. You're a TV station, newspaper or independent media and see videojournalism as an answer to the status quo. Everyone does now.

You train your journalists to create a product which on reflection is little different to your hegemonic dominant ideas of television.  And why should it be any different?  TV works yes!

The knowledge for dealing with your conundrum resides within existing knowledge (ontology). The building blocks you're using emerge from an institutional knowledge that is laid down in stone. It is a theory that is firmly resolute.

Except theories and knowledge are not fixed. We only believe what we believe because current broad thinking suggest so and anything to the contrary abrogates the very tenants of that profession's integrity. Or so we think.

University academia is one where theory and practice converge within a standardized environment, where some lecturers engage in problem-solving look to artistic means, which facilitates the student to think of a different approach.

As Schon and Dewey, notable Scholars who excavate the essence of these theories also note, artistic reflection is difficult to teach.


Videojournalism:
Theories and a Philosophy.

Theories and a philosophy of videojournalism reside not just in a TV paradigm, but institutional journalistic one. The flaw isn't the journalism,  but how you attempt to mould videojournalism into what you know.
Twitter is a great example of how an external agent conceived of a techno-societal product in comms manages to push extra-agency conversations amongst its users. But in the hands of TV has only served to circulate their confined conversation.

I've had two sessions in the last month where my aim has been to make this clear: a clinical company and a Chinese delegation. Both were engaged in what's called knowledge transfer - reworking existing paradigms so see where changes can be made.

If medicine once believed bleeding helped cured illnesses, it wasn't because they were wrong, but because current thinking then of the best minds believed it so. It took radical thinking, beyond the convention to find a new solution.

Within videojournalism, on a theory level for instance, one example is objectivity - a fallacy that requires a new approach. This is not the same as balance - which can also be reworked, and is not to say objectivity doesn't have value. See the medicine analogy above.

But that if the lack of it prevents you from telling a story, there's a problem. This needs a new classification to ensure probity and the integrity of reportage.

On a practical level an example is when the filmic product that emerges tends to be  a poor cut of the same cloth, because the film says nothing more that its sister product TV news could tell. 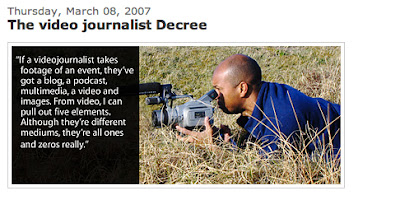 The videojournalist decree first published in 2007 looks at a new framework for denoting storyform.

Here's another interesting observation. Whilst the solution may well reside within the knowledge pool, the approach to dealing with that knowledge requires an artistic approach - an approach so radical as to change the framework and question to your original problem.

The question is not: "I need video on my site, so it requires videojournalism". If you want video on your site - any video producer can do that.  If the question is "I want something on our site which keeps my audience coming back, because the media has that coming-back quality", then you're closer to videojournalism.

Such thoughts have not been a flight of fancy but have evolved engaging in heuristics of videojournalism and TV over 25 years and talking to some of the best minds in the business from Rosenblum, Winston, and Purvis to lesser known but brilliant practitioners, and those outside the profession, such as Applied Chemists and architects.

I'm an Applied Chemistry grad myself and sensed the answer to one of my questions involving videojournalism could only be answered from organic chemistry.

Again we need to deconstruct "Artistic", less you're inclined to think it means Renoir et al. As an Artist in Residence at the Southbank Centre, its Artistic Director  Jude Kelly OBE put it well. It's where you abandon conventional thought, which as an expert you're inclined to follow.  Its risk taking based on hunches, reflective thinking, the irrational and rational - an artistic endeavor.

There was no text book, no convention that ascribed how US Airways 1549 could land on water. It took the ingenuity, perception, experience - artistic - endeavors for Captain Chesley B. Sullenberger and Co pilot Jeff Skiles and crew to steer the plane down safely.  Note in cases like this experience alone is not the determinant.

There are new names emerging now to distinguish the videojournalism it should always have been but became entombed elsewhere. There's accelerated videojournalism or meta-vinejournalism  (pronounced Venee).  The latter is a hybridisation of cinema and video. While meta means: "beyond".

Ultimately journalism was meant to solve something, many things, but principally 1930s onwards: inform, educate, and entertain. Yet to those variables can be added: reveal a reality, care through awareness, meet contemporary demands of techno-social revelations, and so on.

There are many reasons why we still don't know what we should, and that requires a different approach to what we're doing. We'll find a new name for describing this journalism one day.

David Dunkley Gyimah has been a videojournalist since 1994, and started off as a journalist at the BBC in 1987. He is currently completing a PhD and publishes Viewmagazine.tv  He is a Royal Society Television (RTS) juror for the UK's RTS Innovation in media awards and will be presenting at the BFI next month on "INSIDE VIDEOJOURNALISM" - revealing his research, among other things. BFI Videojournalism is organised by David Hayward of  BBC Journalism college, UCLAN Paul Egglestone and David.
Posted by Dr David Dunkley Gyimah at 11:35 am