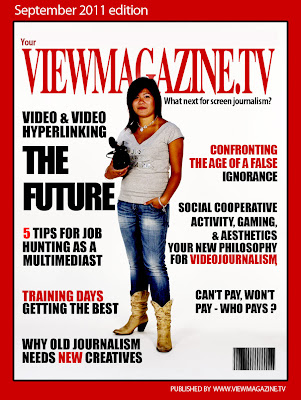 The mood is changing. Slowly, surely in redefining critical theory from an unfurling future of journalism,  we're reconciling attributes that previously were divided: research and practice.

Part of the cause has been educational cutbacks, the other has been policy changes. The result, to push for academic research, which brings kudos to an institution and individual, with practical current knowledge of the status quo  - a tall order sometimes.

By research I'm referring to a reflective practice of interrogating existing knowledge or finding new ideas. And broadly, broadly, speaking practice in industry can be that which is traditional i.e. it always happens this way, or artistic.

Artistic practice rarely gets a look in within journalism which is rule-bound. It should, and will increasingly become so. That's the essence of multimedia at work.

The rub between theorists and practitioners is a perennial one. Theorists might talk about changing semiotics, practitioners film/shoot what feels right. Critical theory and strategy emerges from studies, yet the parameters of what and how we study sets up its own truth value.

Old journalism needs new creatives. Well yes, it always has, but what's different this time? And what are the certainties that still need to be retained?

Meanwhile, the thought becomes: How do I do this, better, yes, OK, but financially competitive than before, Or otherwise how do I do this at X cost and reap a dividend of Y profit.

We want to create the polymaths; I welcome that, but as an exercise its futile if there is no incentive from within oneself and what's perceived as industry expectation.

Shifting Media Aesthetics
When I use a third-shift aesthetic in my work. The term second shift emerges from Prof. Caldwell's book on New Media in 2003, I'm referring to collapsing different disciplines and rewiring a new practical-theory. However I can, I believe only understand what that process will yield if I have sufficient knowledge of both disciplines - as practice.  I must also be aware of what's going in industry.


Good multimedia I contend comes from an implicit deep understanding of sound/ audio and the image within the context also of creativity. That's why we bookmark sites like Devigal's Interactive Naratives, Multimedia Shooter and Honky Tonk Film's , to name a few.

Creating websites from scratch which Viewmagazine.tv, my site, stands as one example that may have little currency for someone entering mainstream, I know that! But it otherwise may foster an entrepreneurial spirit. This is the currency of research and practice in action.

The schism between research and practice manifest itself all the while in Hollywood.

Experts talk about catering for the audiences, while another set claim the audience does not know what it want's until it's given it. No one was crying out for a film called Avatar, or Blade Runner. These were visions of the practitioner, but we all flocked to the cinema.

At some point research and practice combined:  audience research kicked in, defining publicly in this case an alternative ending to what Ridley Scott wanted. He would later release the Director's cut.

The point here is that storytelling is phenomenological, it emerges from within you. The subject informs you, and whether by rote or artistic practice you set about building your creation. You the creative decides.

Converging Research and Practice
So here's a question. Has the Internet changed journalism? There's a philosophical pursuit that despite the turmoil of the last few years can still be justifiable written up as "undecided". Arguments and sophistry, as opposed to dialectics, set out to mark victor and vanquished.

"You want the truth, you can't handle the truth" was uttered from A Few Good Men(1992). In practice, the truth combining practice and theory is an evaluation that reveals elasticated flaws and truths on both sides. It depends who you've read, who you cite, and how they tally with your own beliefs, and the logic of your own argument.

For a good while now we've been caught in an eddy of an industry looking for answers, sated by one mega conference after another extolling what's next. It's big business now, though less frenetic than it was three years ago.

Bridging what exists in journalism industry real world, with theory/practice in academia can often be the tail wagging the tail of another dog. The industry looks to new ideas from outside itself, but often may disregard them, until as such time its perceived as a critical mass effect.

Editorial systems often mean one person holds the key to any change. And sometimes for  legitimate reasons change cannot be implemented.  Real world issues such purchasing new macs are prohibitively expensive when for the last twenty years you've been windows-based. The practice-theorist ought to know that.

Yet often theorists and practitioners clash. Real world, and exercise world are parallel universes, touching each other but not, well, overlapping. That's what could change. If the future sees more of the convergence of practitioners with research knowledge who knows?

David Dunkley Gyimah has worked in the industry since 1987, and lectured Masters, as well as MBAs and industry professionals since 1997. He is currently completing his practice-based PhD with SMARTlab, University College Dublin. Viewmagazine.tv is where he discusses industry practice and theory.
Posted by Dr David Dunkley Gyimah at 1:00 pm