Tyler Durden: I want you to hit me as hard as you can.
Narrator: Why?
Tyler Durden: How much can you know about yourself unless you have been in a fight.

Fight Club is a phenomenal film on so many levels: the script, the directing (Finch); and the philosophy embedded in the above statement.

Now for the many of us who don't want a fisticuffs and bruised body's there's something else to savour.

I rephrase: How much do you know about yourself unless you have been in a creative fight?

As much as I can, I take the chance. I cheat a bit because as a lecturer I get some students who creatively push me. Educationists and trainers know about this. But then there's the other side, the hardcores.  These are the pros at the top of their game who in Bergsonian speech:

"...imagines relations of magnitude, which adjust themselves to one another. mathematical functions which go evolving and developing their own content: representations, laden with the spoils of matter".

Bergson's talking about philosophers getting to grips with consciousness and images in Matter and Memory published in 1912 (I have become interested in memory as storytelling). Yesterday I was in Brian's creative fight club. Brian Storm of MediaStorm.

Creative Nudge
You know what it's like, someone, sometimes, does that. And then YOU raise your game. They're human catalysts: the preacher, the pastor, the professor, the evangelist.

Sit down and listen. Really listen. Humility matters. Because sometimes it's not only what they say, but the chain reaction of a series of unintended consequences that they trigger. 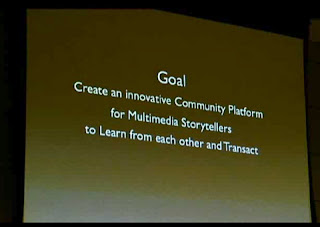 In the bar later we had a chance to catch up. I saw Brian present in Miami Wemedia  two years ago. I was "squint eyes" impressed then, as I was yesterday, but this time I got a more in depth measurement of his philosophy over the day as he set about deconstructing what MediaStorm does and its knowledge value.

I have worked for BBC Radio over many years before going into TV, so I reckon I have a firm understanding of many of the principles of sound and few people do sound/ audio better than the BBC. But Brian has found an illustrative way of informing learners that is elegant, powerful and compact.


This is one of my first BBC Reports in 1988, having just graduated It's Nelson Mandela's Tribute Concert at Wembley with Peter Gabriel, Natalie Cole, Anita Baker, Neil Kinnock MP etc.

On his format for storytelling he's tapped into the rich seam of Sassure's and Walter Benjamin's semiotic to unveil the meaning of the image. It's a masterclass in visual language without the accompanying epistemological terms of signified and signifier or Benjamin's Punctum.

His publication continues to grow as he builds on a strategy of firstly an absorptive form of storytelling, yet also addressing subjects, that mainstream media would deem difficult and thus leave. I speak from experience here having sat in untold number of network TV editorials. Therein lies Brian's humanitarian spirit, displayed further when he talks of his company as purpose-focused, rather than profit-focused.


And then from his past, which raised a chuckle for me, how he has drawn from a penchant to experiment and build, whether it was at MSNBC or Corbis. The irony, where he tried to do so much, but ultimately hit a ceiling became the defacto inspiration that forced Brian him to make his own way, and what his company is today.

Chuckled, sorry, yes, because I too remember the dark days and nights of quasi death marches creating CD roms on Director 1; burning through hundreds of CDs because they would not self auto start, because a line of lingo code gone astray.

Playing to the Audience
Then there's Brian's hidden pièce de résistance - his player. Built from the ground upwards, it's frankly something you might have expected from a bespoke tech-player company e.g. Brightcove et al. But it isn't because Brightcove's profit perspective I suspect rather than the customer focus played to a different strategy. One that had many users smarting when Brightcove announced they would cease to share their player with the creative community -sans fee.

The elegance and backendness of MediaStorm's player  hides a potency that is persuasive. It's designed to meet the solutions a producer encounters. You want one :)  It's a matryoshka gift when Brian breaks open the back of his company's two year old upgraded website - now skinned via drupal. Nice!

The Business end of making money amounts to a book: How to make cool media and sell - MediaStorm, I suspect will be in a bookshop, their own online bookshop - sometime. All of this all snuggly bound together; textual with arresting imagery.


Part of the art of creative fighting is to talk about your philosophy by engaging with others, without any hubris of talking about yourself. What emerges then is a series of narratives of life stories and how to overcome one hurdle after another.

And each hurdle represents a problem that is universal; so it has relevance to you. The brand and the knowledge go hand in hand; they become one in the same. Just as if you wanted to understand ET, you'd interview Spielberg, so here to understand a range of media variables in the intensely-unfurling-evolving-media, you speak to Brian.

My motto has always been, "if it hasn't been done, it's waiting to be done",  and the journey to get something accomplished is a narrow and lonely one -at least for a while. And that lastly don't hide it, don't leave it under a bushel, but that in the process you will find naysayers telling you it can't be done.

That's almost the theme for doing a PhD in the academic world. Brian reminded me and many others of the creative fights needed to up our games in in the public world. There's work to be done after the Storm.

Apple Profiled David Dunkley Gyimah is a Knight Batten winner in Innovations in Journalism and an International Award winning videojournalist, among other accolades. He publishes the award winning  viewmagazine.tv and is a senior university lecturer, artist in residence at London's prestigious Southbank Centre and is completing his PhD in innovative news at the SMARTlab University College Dublin. His part includes working for the BBC, Channel 4 News, ABC News ( South Africa) and devising news programmes and training programmes around the world over a 25 year career.

If you into creative media working with the BBC we're organising another creative fight club" on videojournalism. I can't wait.

p.p.s  A big thank you to Charlotte and the FrontLine Club for hospitality - as usual. And for the free membership for yesterday only of the Front Line Club. Hurray!
Posted by Dr David Dunkley Gyimah at 9:45 pm